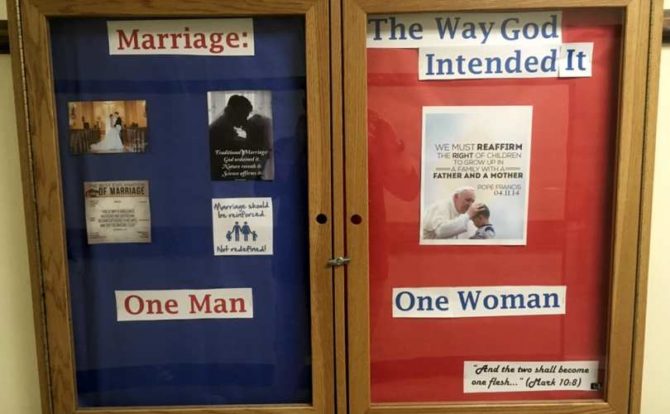 Michael Smalanskas has been having a rough semester. The 22-year-old philosophy and theology major has taken quite a bit of heat from his classmates after putting up an antigay bulletin board with the headline “Marriage: The Way God Intended It” in his dorm hallway.

“Traditional marriage: God ordained it. Nature reveals it. Science affirms it,” the bulletin board said. “Marriage should be reinforced. Not redefined!”

The billboard also included a quote from Pope Francis that read: “We must affirm the right of children to grow up in a family with a mother and a father.”

Related: This Catholic school for boys didn’t realize there’s something deeply creepy about their new statue

Not just that, but people started “milling around” his room and ganging up on him in the hallways, he claims.

“I couldn’t even go brush my teeth for several nights without facing a mob!”

Then he found this very intimidating cartoon of himself being raped by another man taped to a mirror in the men’s bathroom: 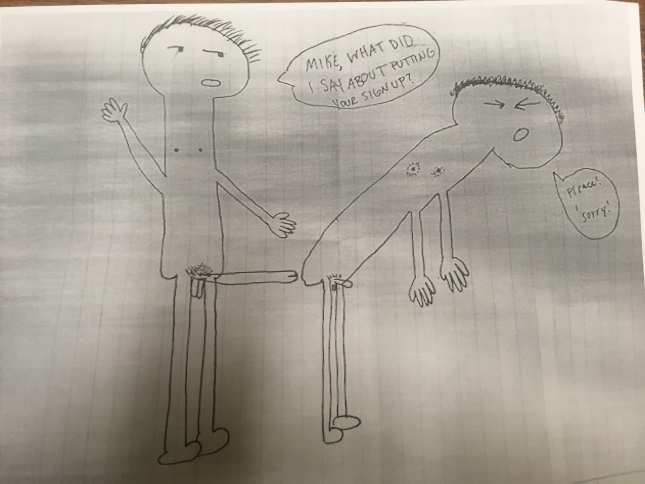 Smalanskas insists his homophobic billboard was “not an act of aggression in any way.”

In fact, he adds, “there had been a pro-lesbian bulletin board up for the entire month of February in one of the female residence halls.”

“But nobody was rioting outside the girl’s door!”

To add insult to injury, Smalanskas says the college has not been supportive of his ordeal. When he went to the chaplain for help, “he basically begged and pleaded with me to ‘graduate in peace’…he told me that I was ‘throwing culture bombs.’”

Not just that, but shortly after the scandal broke, the Vice President of Student Affairs sent out an email to students encouraging them to attend a protest “against homophobia and transphobia.”

“There’s a tremendous double standard when it comes to Catholic teaching or conservative views,” Smalanskas whines. “They are just not protected in the same way.”

He calls the treatment he’s received, and especially the cartoon picture of himself, a “very disturbing threat” and “a Title IX issue now.”

“A lawsuit’s not off the table by any stretch!”