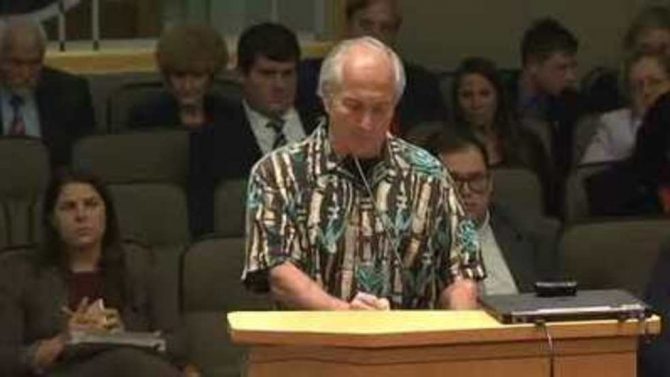 Here’s something you don’t see everyday.

At a public testimony hearing in Florida last week, a man was so homophobic that another homophobe had to tell him to leave the room.

Greg Pound was speaking before the Florida House Appropriations Committee about a school voucher program that offers scholarships to students who want to attend Christian schools that promote antigay values.

“Just a real quick question on the alphabet there,” Pound said. “The L is for lesbians, the G is for gay, B is for bisexual, T is for transgender, Q is queer, and then P would be pedophile. Now, let me ask you this … where do these people get their children?”

When Pound asked why, Cummings replied, “On what grounds? What’s come right out of your mouth. It’s offensive.” Then he ordered the sergeant at arms to remove Pound.

Ironically, Cummings himself is a major Trump supporter and embraces the Republican party’s anti-LGTBQ platform. Also, in 2015 he voted against a bill that would have made it legal for same-sex couples to adopt children.

Many have praised Cummings for shutting down Pound’s homophobic tirade.

A member of the public just told our House Appropriations Committee LGBTQ stands for "lesbian, gay, bisexual, transgender, queer and P for pedophile." Thank you Chair @Travis_Cummings putting a stop to this bigoted rant. Homophobia is alive and well in Florida.

Budget Chairman Travis Cummings tells Greg Pound to end his testimony in committee after Pound refers to LGBTQ as "Lesbian, Gay, Transgender, Queer, and Pedophile"– thank you Chair Cummings for calling out this offensive language that has no place in the Florida Legislature.

Now if only we could get him to stop advocating for policies that harm LGBTQ people.

Related: Like with HIV and homosexuality, Mike Pence believes the solution to coronavirus is to pray it away