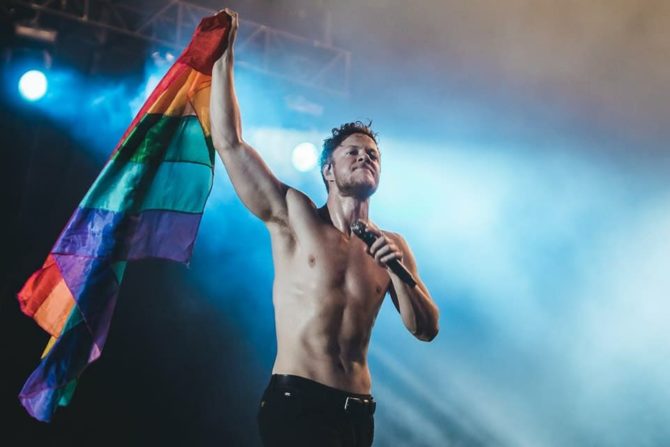 Imagine Dragons frontman Dan Reynolds is on a mission to improve the way the Church of Jesus Christ of Latter-day Saints treats the LGBTQ community.

Reynolds was raised Mormon, but as teen suicide rates in Utah have soared, he’s been fighting for greater acceptance within the church and to let queer Mormons know that they are seen and heard. In 2017, he teamed up with former Morman rocker Tyler Glenn to stage the first of what has become an annual music festival in Salt Lake City. LoveLoud, which takes place on July 28, aims to raise a million dollars for organizations like the Trevor Project and the Tegan and Sara Foundation as well as Utah-based LGBTQ charities.

The process of putting the first-ever LoveLoud festival together and Reynolds’s own interrogation of the LDS Church’s policies toward LGBTQ Mormons is the subject of HBO’s new Live Nation-produced documentary, Believer.

All of this landed Reynolds on Queerty’s Pride 50 list, a much-deserved honor.

On tour with Imagine Dragons now, Reynolds took some time over the weekend to tell Queerty all about his hopes for the doc and the future of equality within the church.

How did you first become interested in LGBTQ equality?
Growing up, I had a friend in middle school who was gay and Mormon. He hid his sexuality because he felt so much religious guilt. He feared that he wouldn’t be accepted by his peers.  I also lost friends in high school to suicide. That is when I began to realize there was a conflict and something needed to change.

What does the church teach about homosexuality?
The church doctrine teaches that marriage and sexual relationships should remain between a male and female.

For those of us who didn’t grow up in the church, can you explain what are some positive teachings you have learned from Mormonism?
I have three little girls, who are my whole world and I love the idea that I can be with them forever.  I also love the service aspect of the religion.

Why do you think the institution is slow in adjusting to current social issues?
The LDS Church believes in modern revelation, which essentially means that the church leaders, specifically the Prophet, communicate with God who then lets them know how to run the church. So members of the church believe that even if they want to change doctrines, the doctrines are not theirs to change, that is for God to decide. This makes for a very slow progression on social issues within the church, but as we saw with Polygamy in the late 1800’s and again with race issues in 1978, the church eventually evolves and progresses into a more loving and accepting entity.

You’re headlining the second LoveLoud Festival next month. What impact has the festival had?
I think the LOVELOUD stage is the most important stage I will ever stand on.  The festival has helped facilitate vital conversation about what it means to truly love and accept our LGBTQ youth.