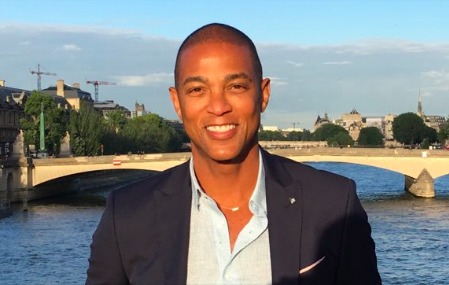 Gerren Keith Gaynor is gay journalist based in New York. His work has been featured in the New York Times, theGrio, and BET, among others.

In a moving new essay published by The Root, Gaynor writes about the tremendous impact Don Lemon had on him just a few years ago when he was struggling to come out.

Related: Gay grandpa opens up about coming out. And yeah, this is the correct photo.

Gaynor met Lemon at the 2016 Native Song Awards, which celebrations visibility and achievements of gay Black men. Lemon was being honored at the event; Gaynor was there to cover it.

Gaynor approached Lemon to ask him a few questions about his coming out experience.

“Being out both personally and professionally is liberating. I am a completely emancipated person. I am free,” Lemon told me at the time. “That’s a great place for people to strive to be. I think everyone should be out in all places.”

Lemon came out publicly in his 2011 memoir Transparent. Since then, he has been very encouraging of other public figures to do so as well.

But the exchange didn’t stop there.

Things took a more personal turn when Gaynor mentioned that he himself was having trouble coming out to his family. That’s when Lemon said, “Well, let’s talk about that.”

Feeling safe in this space of transparency, I gave Lemon the Cliffs Notes. I explained that most of my fear surrounded my relationship with my mom. As a writer and somewhat of a public figure, I was particularly fearful of being out publicly and how it would impact her.

“I think that one day that will turn to pride from your mom, because it’s all just fear. And your mom is a lot stronger than you realize,” Lemon said. “She can probably deal with more than you think. I think you’re probably more afraid than she is.” He also offered that I call him anytime if I wanted to talk more about it.

Gaynor says the exchange is what finally gave him the courage to be honest with his mother. And, as Lemon predicted, it wasn’t nearly as bad as he had feared.

“Surprisingly, or maybe not so surprisingly, Lemon was right,” he writes. “My mom’s reaction wasn’t the traumatic meltdown I had conjured up in my head all those years.”

In that moment, I felt as if I had shed so many layers of shame, anxiety and fear that I had been carrying for years. No longer having to wear that cloak of emotions was a cleansing of sorts. By the end of our talk, I took a deep breath, and my mother asked me ever so lovingly, “Do you feel better now?”

“Without question, if it were not for Don Lemon’s push, I would not be in the space that I am in today,” Gaynor says. “I would still be somewhere waiting for the ‘right time’ while my life continued to pass me by.”

“I am forever grateful to him for cultivating a safe space of brotherhood and transparency and encouraging me to step into my truth.”

Related: This emotional coming out scene between a father and his son will have you in tears