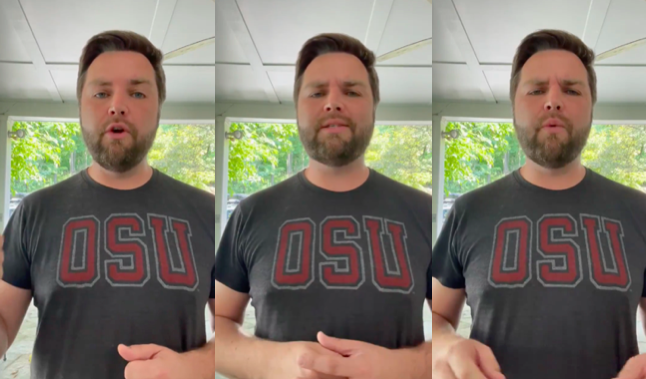 Bestselling-author-turned-GOP-clown J.D. Vance has once again demonstrated that he’s willing to say or do just about anything to appeal to Republican primary voters in Ohio in his race to be their nominee in the 2022 midterm election.

The 37-year-old bigot, whose U.S. Senate campaign is being largely funded by gay billionaire Peter Thiel, just posted a deeply racist and factually inaccurate video to his Twitter page filled with so many vile and offensive comments about Afghan refugees that we’re not even going to repeat them, but you can watch it, if you want. (Viewer discretion advised!)

Here is my message to Ben Sasse and other establishment Republicans who seem to care more about bringing 30,000 unvetted Afghan refugees into our country than getting our own people out safely. pic.twitter.com/PSfoc2swdC

The Hillbilly Elegy author’s video was clearly designed to get people inflamed. Unfortunately for him, most viewers saw right through his racist dog whistles and feigned outrage and instead couldn’t stop focusing on his erect nipples protruding from his too-small Ohio State University t-shirt. That and his terrible eyeliner.

Are you wearing eyeliner? Can I give you some tips for next time?

peter thiel is probably wishing he had his money back

Did you do your own makeup?

Your protruding nipples are destroying my sovereignty

The way this crops it really accentuates the nipples in a way that I don’t care for.

Real leadership is doing some push ups. For the love of God man, have some self respect.

Are you wearing eye liner?

As a general rule of thumb, when posting any sort of video to social media, it’s usually best to double check the camera angle and lighting to make sure it’s flattering. Otherwise you end up looking like J.D. and nobody takes you seriously.

Not that anybody took him seriously before this. Despite making national headlines with his vapid Donald Trump-inspired publicity stunts, Politico reports that Vance isn’t breaking through with Republican primary voters in Ohio.

Though he hasn’t said it outright, Vance also seems to support Trump’s trans military ban and possibly DADT. His campaign website states: “American political leaders should stop using America’s military as a social justice side project. Our troops don’t need to focus on diversity or equity or any other progressive buzzword; they need to focus on fighting and winning America’s wars.”