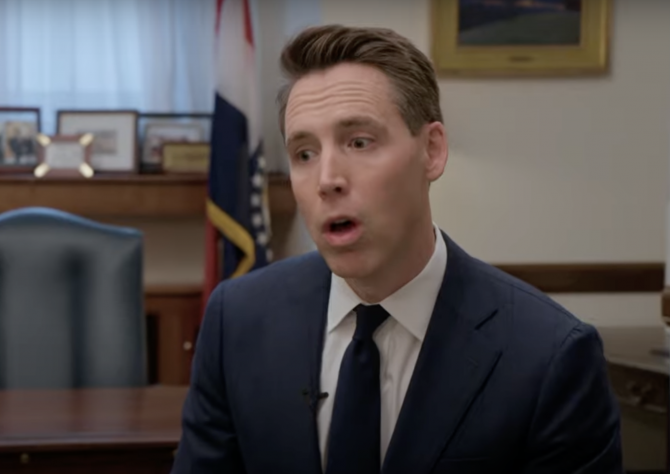 Anti-LGBTQ congressman Josh Hawley is once again the laughingstock of Twitter after showcasing his lack of understanding of basic human anatomy.

Thom Tillis responded to the question by saying, “My wife.” Meanwhile, Lindsey Graham defined a woman as someone who is “biologically a woman.” And Ted Cruz said, “A Homo sapien with two X chromosomes.” But it was Josh Hawley’s response that has drawn the most widespread ridicule.

Hawley, who believes straight white cisgender males are the most marginalized group in America, began answering the question by mansplaining about how womanhood is inherently tied to an individual’s ability to give birth.

“Someone who can give birth to a child, a mother, is a woman,” he said. “Someone who has a uterus is a woman. It doesn’t seem that complicated to me.”

Turns out, it’s a little more complicated than that. Because things quickly fell apart when the reporter followed up by asking about women who have had hysterectomies, a procedure the CDC estimates 20 million people in the country have undergone.

“Yeah. Well, I don’t know, would they?” Hawley responded.

When pressed further about whether a woman would still be defined as such if she lost her reproductive organs to, say, cancer, Hawley answered the question with another question: “I mean, a woman has a vagina… Right?”

“I mean, a woman has a vagina, right?” Hawley opined.

Meet Josh Hawley: A man who has only anecdotal knowledge of a woman’s reproductive system. A man who would be at a loss to define, let alone find, a clitoris.

A reporter asked if a woman who lost her uterus due to a hysterectomy or cancer would still be a woman.
“I mean, a woman has a vagina, right?” Josh Hawley said.

Well, damn, I know a lot of trans women who have vaginas!

So, if I’m no longer a woman, what am I, exactly? Vagina-man? My husband is going to be so confused.

Josh Hawley reduces women to “a vagina.” That’s all that makes us a woman. According to Josh.

If Ted Cruz and Josh Hawley had a baby it would be Tom Cotton.

So if all you need is a vagina to be a woman then a trans woman who has had bottom surgery is a woman, right @HawleyMO?

“I mean, a woman has a vagina, right?” Hawley opined.” On top of all else, Hawley doesn’t seem to know the difference between a vagina and a uterus.

What the interview didn’t report was that Senator Josh Hawley had to consult with his handlers to then say women had vaginas and that qualified them as women. Though initially unsure, he eventually concurred.