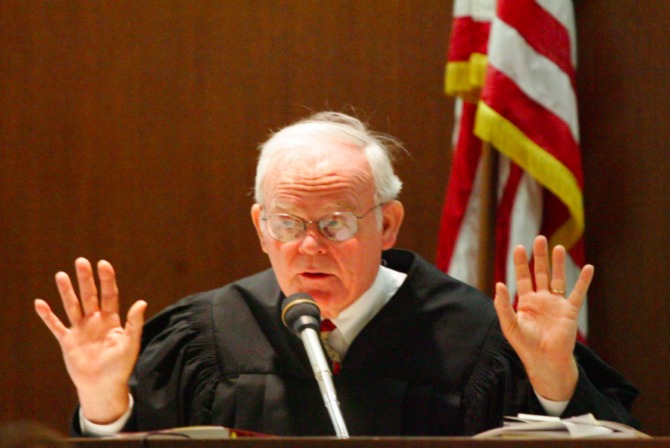 A retired judge from California is under fire for allegedly making disgusting remarks about an HIV-positive murder suspect, the Desert Sun reports.

Former Riverside County Superior Court Judge David B. Downing is accused of refusing to read any motions filed by Kaushal Niroula because the defendant is HIV-positive and the documents were delivered in envelopes that had been licked closed.

“Lord knows where his tongue has been,” Downing purportedly said.

The alleged remarks were made in 2012 during a break in the jury selection process. Niroula was on trial alongside co-defendant Daniel Garcia for the 2008 murder of retired art dealer Clifford Lambert. The courtroom mics were switched off at the time, but Garcia left his laptop on and was secretly recording what was going on unbeknownst to anyone else in the room.

Upon being discovered, the recordings were confiscated and have been tightly sealed ever since, so it cannot be confirmed whether Downing actually made the remarks. But official transcripts show he was later confronted about them in court. He didn’t deny making them, instead claiming he was free to say whatever the hell he wanted.

“It is a commentary regarding my health status and not reading my given motions because you are concerned about where my tongue has been are inappropriate, your honor,” Niroula said, according to the transcripts.

Later, the transcripts show Garcia tried explaining to Downing that it was “difficult to proceed in a trial” knowing that the judge had “made fun” of Niroula’s HIV status and wouldn’t consider his motions because of the envelopes they came in.

“What do you care what I said about Mr. Niroula?” Downing interjected. “Worry about yourself right now.”

When Garcia said he was “personally offended” by the comments, Downing replied by asking, “So what is your point?”

Niroula and Garcia were eventually found guilty of the murder. They are now using Downing’s alleged remarks to appeal their convictions. The DA’s Office has not yet decided how it will proceed, but a spokesperson says the office may need to review the sealed recordings “to ascertain what occurred and when.”

When asked for comment on the matter, Downing told the Desert Sun he barely remembered the trial or what he may or may not have said.

“Who knows?” Downing said. “I don’t know what was said five years ago.” Then he added, “Off the top of my head, I didn’t say that stuff.”

He followed that up by saying it was “the fairest trial ever–and then some.”

Downing retired in 2013 but returned to the bench part-time in 2015. He remains on a court roster of retired judges who occasionally fill vacancies on smaller cases when needed.

Related: Gay couple grilled by judge about their sex lives for four hours