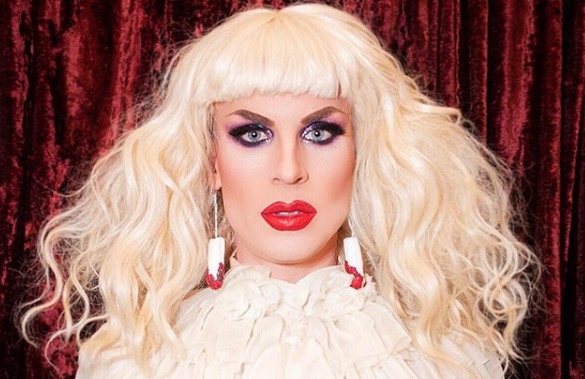 Her one-woman show may be called “Help Me, I’m Dying,” but Katya Zamolodchikova, aka Katya, aka Brian McCook is doing just fine, thank you.

The RuPaul’s Drag Race season 7 and Drag Race All-Stars season 2 standout has had a wild ride, from coming up in the Boston drag scene to finding a massive audience through TV and an ever-expanding one with the success UNHhhh, her web series with Trixie Matell. UNHhhh was later picked up by Vice for television as The Trixie and Katya Show for one season, and now the pair are back to producing UNHhhh.

Along the way, McCook took time off from the series, and from drag, to focus on mental health, and his willingness to be open about the process was a welcomed dose of honest realness.

It’s easy to scroll through Instagram and convince yourself that people are living the ‘dream,’ but we all have work to do throughout our lives. As queer people, some of that work can be especially challenging to unravel.

The good news? Katya is back and on a world tour, baby! “Help Me, I’m Dying” is set to make its way across Europe, Canada and the US. Head here for tickets and info.

Queerty’s Dan Tracer caught up with Katya to talk about dreams, drag names, shapeshifting, and more.

Hi Katya! Good morning–is it morning where you are?

Oh wow, that’s actually the perfect location for my first question. As Katya, part of the gig is you have to be so extroverted out in public, but you also seem like an ‘inner world’ queen, too. What are your dreams like?

It’s going to be that kind of an interview.

OK perfect. Actually last night I had sleep paralysis! Do you know what that is?

That’s like when you consciously wake up but your body is completely inaccessible.

I got it a lot as a kid. I’d start to fall asleep and then I’d feel like I’m being attacked. The one that happened last night, I was on my side and I felt like there were two people, one on my back and one facing me, that were trying to attack and I was trying to scream “Help!” And I couldn’t get anything out of my mouth.

It’s horrible, yeah. But there were two sleep monsters this time. Usually, there’s only one.

Have you ever lucid dreamed?

What’s that like for you? I have too, I’m obsessed with lucid dreaming.

Because I’m in a dream and I can do whatever I want.

Right, you have that moment where you’re like, “Oh, anything’s possible?!” Mine’s always flying. I’ll think, “Oh I can do anything? I can fly!” And then I’ll float up and get so excited that I wake up.

So in dream world or in real world, if you could choose between invisibility or shapeshifting as a power, which one would you go for?

Oh shapeshifting for sure.

I mean you kind of already are a shapeshifter.

Right but it would be so much easier to just do it at the drop of a hat.

Oh god, yeah, that would save you several years of your life. And plausible scenarios, if a UFO came down right now, and some goopy alien prince discreetly took you aside, and you know, offered you some tea, was very nice to you, and then gave you the chance to leave, right now, no time to tie up loose ends, no goodbyes, would you go?

Yeah, that’s fair. And if he said you could make one phone call before you left, who would you call?

Oh! [Laughs] I sort of assumed you’d have to have the person’s phone number already, but that wasn’t part of the question. I would love to hear that conversation, you, on the line with President Obama, just before your interstellar departure. But leaving Barry out of the picture, you’re close with your family, yeah?

So they do know you’re a drag queen?

Nope. They think I work for UPS.

Your secret’s safe with us.

I have a really wonderful family, an older brother and a younger sister. They’re great.

Has your older brother ever tried on one of your wigs?

Well we used to have wig parties.

And he just had a child. So I’m an uncle now, and I’m looking forward to procuring some child wigs.

What names did you cycle through before becoming hermetically sealed to Katya?

Gosh I can’t even remember… There was Sigourney Beaver. She was in the mix at some point.

Stop it. The name I’ve been floating for years is So-horny Beaver.

And run us through the characters in your one-woman show, Help Me, I’m Dying. It’s a one-woman show, but you come out in multiple characters. Katya is there but she doesn’t snag all the stage time. Who are the other featured players? 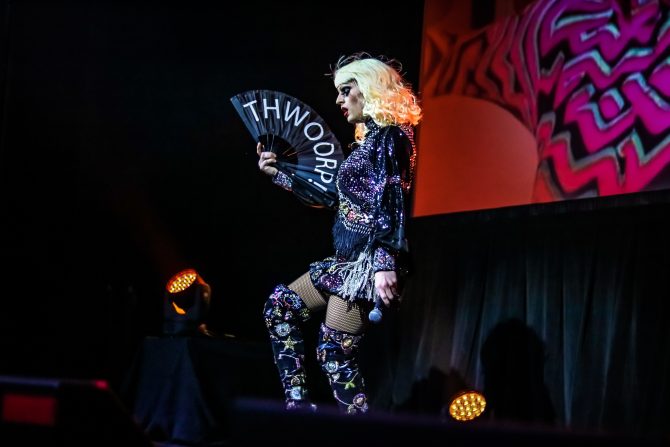 Which of those three is the most comfortable for you?

Probably the Russian one. I just get into the accent and the origin story, which changes all the time. And I love that about it. It’s like, “Now I’m going to tell the truth,” and it’s never the truth.

I was lucky to have seen the show at the ACE Theater in Los Angeles back in March, which featured Trish in the most bizarre and brilliant physical comedy crowd-play I could ever imagine. For people reading this, you brought an audience member up onto the stage, sat him in a chair and crawled all over him, creating what I can only describe as some kind of kinetic, living, comedy sculpture. Has it changed or evolved as you’ve been touring?

Yeah, it changes all the time. In Singapore, I actually had another performer come up who I used to perform with in Boston, join me on stage, and we did a duet — we did Barbra Streisand and Celine Dion’s “Tell Him,” which is a song about a woman in love — she’s so in love with this guy but she’s too afraid to let him know how she feels, and the audience member we brought up was really not up for it. He was this straight dude who was probably dragged there by his girlfriend, and the song is really long, so he was just tortured for probably like, ten minutes. It was hysterical.

And did the audience love that or was it uncomfortable?

Oh they loved it.

Yeah it was amazing to watch and probably harrowing for him to experience.

But maybe, ultimately, a good experience for him?

Yeah, or maybe not!

Or not! And so you’re touring now, you have quite an ambitious schedule ahead of you, and I strongly encourage folks to make it out to your gigs — how does the tour life treat you?

It hasn’t been so bad! And we’re actually on a bus starting next month, which I’m very excited about.

And I see you have a show in New York during World Pride, are you even ready for that much queerness?

I don’t think so.

They say 4.5 million people are expected to descend upon the city.

That’s too much gay, I think I’m going to be homophobic by the end of that.

And the reason it’s this massive confluence is it’s the 50th anniversary of Stonewall, and here at Queerty, we’re doing our Pride50 series honoring 50 LGBTQ trailblazers. We’ve been asking people where they see the movement headed in the next 50 years. What do you think Pride100 will look like?

Well, it’ll probably look like Atlantis because we’re going to be underwater. But one of the things I find encouraging is that young people these days, their conception of sexuality is much more fluid and less defined, which I really like. On the one hand, Gay Pride is great, but I also love this kind of like… ‘it doesn’t matter’ sort of attitude about it. You’re interested in who you’re interested in, it’s the blurring of the boundaries of sexual identity.

Identity changes. I think it would be better if there were more consensus on larger, broader issues like compassion, non-violence.

That sounds pretty good to me. Now one last question, a really important one. There is this theory that when the Big Bang happened, it actually created our reality and a second mirror reality which is just like ours except time moves in reverse. So I want to know… what is your drag name in the mirror reality?

Ohh… in the Benjamin Button one. Oh gosh. Sharon Stone.

Oh because I guess she wouldn’t really exist as “Sharon Stone” in that universe.

No, she’d be something else.

So you’d just be Sharon Stone.

I’d just be Sharon Stone with a dick and that would be the huge gag in Basic Instinct.

Hello! That’s a great place to leave off, thanks!

“Help Me, I’m Dying” is currently touring across Europe, Canada and the US. Head here for tickets and info.