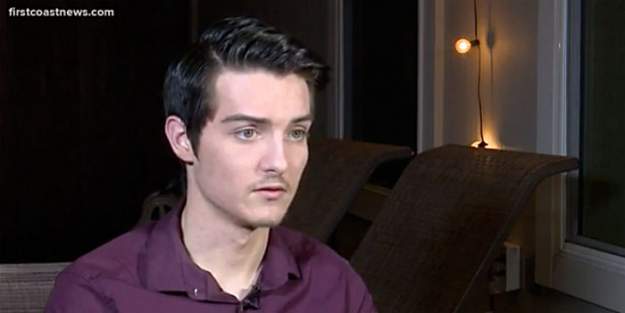 A Florida man says he was kicked out of his apartment for being gay. And he has video to prove it.

Randall Coffman moved into an in-law apartment owned by Jackie Cooper at the beginning of December. Two weeks later, he says she kicked him out when she learned he was gay.

In cellphone footage obtained by First Coast News, Cooper can be heard shouting, “Listen to me now, you have to leave this place.”

Coffman says it all started when Cooper forbid him from having any lady friends visit the apartment at night. He replied by saying that wouldn’t be an issue because he’s gay.

“I’ve been gay since I was born,” he explains. “After that, the harassment for being gay started.”

In the video, Cooper says, “You didn’t tell me you’re gay until yesterday.”

To which Cooper replies, “You think I want homosexuals coming in and out of my place like that?”

According to First Coast News, Jacksonville passed a Human Rights Ordinance in 2017 that protects tenants from housing discrimination based on sexual orientation; however, the protections don’t exist in Clay County, where the apartment is located.

“My friends have only come maybe three times,” Coffman says. “I actually made a guest list of who would come and visit me. I put my mom and dad and actually printed out pictures of everyone’s cars and put them next to their names.”

When approached for comment, Cooper denied the accusations and claimed Coffman’s guests would leave their parked cars on her property for days on end.

Coffman says Cooper gave him until December 27 to pack up and get the hell out, which may violate a law that requires landlords to give at least 15-days notice prior to the end of the month. He’s currently looking for a new place to live.

“If I was straight,” he says, “I think me and her would get along great.”