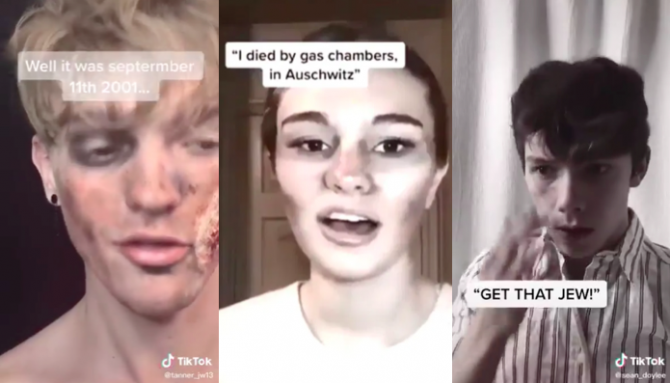 There’s a new trend on TikTok and it involves young people pretending to be victims of the Holocaust, the Columbine school shootings, the 9/11 terrorist attacks, and other horrific acts of violence. And they’re doing it all in the name of views, er, “raising awareness.”

The sickening trend involves creators making themselves up to look bloodied, beaten, and burned and then pretending to be angels in Heaven as they explain how they died in Nazi-run death camps, the Twin Towers, or by being shot at school.

if you thought holocaust tiktok was bad you might also hate 9/11 tiktok pic.twitter.com/Z9LKJVFxva

the outfit choice was not over looked either @tiktokcreators pic.twitter.com/jHz5Bz2hlj

One 17-year-old TikTok star tells Business Insider she made a victim video because “I’ve always been interested in the history of the Holocaust and just wanted to make a creative video informing people about it.”

The Auschwitz Memorial put out a statement last week criticizing the trend, specifically people who pretending to be victims of the Holocaust, calling it “hurtful and offensive.”

“The ‘victims’ trend on TikTok can be hurtful & offensive. Some videos are dangerously close or already beyond the border of trivialization of history,” the organization said.”But we should discuss this not to shame & attack young people whose motivation seem very diverse. It’s an educational challenge.”

Meanwhile, TikTok has chosen not to comment on the trend other than to say the videos do not violate its guidelines because they “aim to raise awareness.”