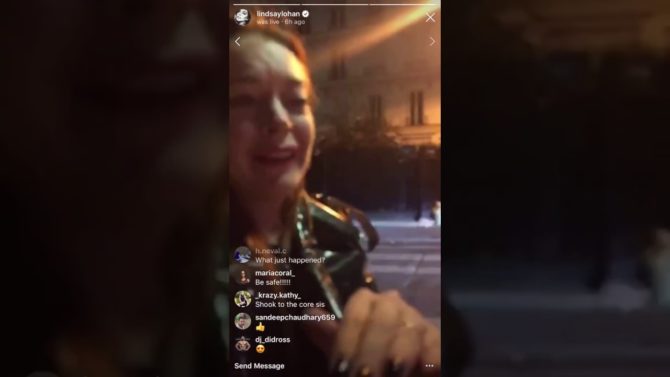 How was your weekend? Did you harass any homeless families and/or attempt to take children from their mothers? No? Well, you had a very different weekend than Lindsay Lohan.

Reportedly after leaving a nightclub in Moscow, Russia, the Mean Girls star introduced her Instagram audience to what she claimed to be a Syrian refugee family.

With her phone horrifically close to the family’s faces, she aggressively offers to put them up in a hotel for the night. They decline.

Then things really start to get weird. Lindsay’s next offer is to get a room just for the kids, telling them how “cool it would be” to watch movies all night. They decline.

Somehow the scene keeps going, tumbling down a rabbit hole of exploitation.

Lindsay, speaking in a Middle Eastern accent, follows the family as they try to get away from her, suddenly accusing the mother of human trafficking.

“Don’t f*ck with Pakistan!” she yells, still trying to get the children to come with her.

When Lindsay goes to grab one of the children by the hand, the mother finally loses it and shoves her.

And then… Lindsay cries.

If you think any of that sounds exaggerated, watch below.