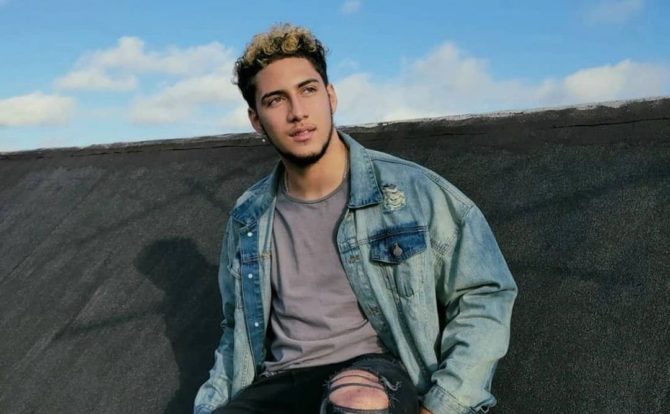 “As you can see,” he wrote in the caption, “it’s not easy for me to come out of the closet, but here it is!”

The Fordham University linebacker told Instagram followers that he had struggled with his identity his entire life but was ready to show his true self to the world.

“I’m bisexual, and I’m proud of who I am,” he wrote. “Thank you to everyone who has ever supported me.”

And that support has only multiplied in the last year and a half, starting with coaches and teammates at Fordham.

“I said it’s a very brave thing you did and we’re here to support you in any way, shape or form,” head coach Joe Conlin told The Bronx’s News 12, recalling his reaction to Vazquez coming out. “It was no big deal because it’s not a big deal, you know? That’s who he is, and we love him.”

That said, Vazquez did experience micro-aggressions from teammates while still in the closet, as he told The Fordham Observer.

“I don’t think anyone on my team is homophobic, but hearing gay jokes or hearing homophobic tendencies in conversation would just eat at me,” he said. “I wanted to say something, but I didn’t want to out myself,” he told the newspaper.

He also he observed that LGBTQ topics can be “taboo” in the Fordham Athletics culture.

“It’s something that’s not brought up, and even when I say ‘LGBTQ’ in front of some people, I can feel them tense up like it’s a subject that (they think) maybe we shouldn’t talk about it in the locker room or on the field,” he said. “I think it should be normalized and I think the only way to normalize it is to continue talking about it.”

But now Vazquez is working to make college sports a little more welcoming. In August 2020, Fordham Connect — a student-run organization combatting stigma around vulnerability in sport — named him executive leader of its LGBTQ subgroup.

“I hope that I inspire other athletes, younger than me, older than me, to see themselves through me,” he told News 12 at the time. “If I had seen someone like that, I definitely would have felt comfortable myself earlier on in my life, and I hope that I can do that for other people.”

We’re proud of Vazquez for providing another example that LGBTQ athletes can shine in college sports and helping provide a safe space to those who might feel stigmatized in athletic programs.