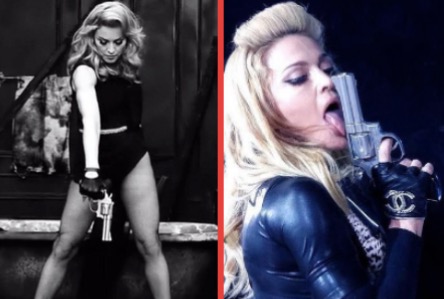 In case you haven’t heard, Madonna‘s in the midst of making a major comeback. On Friday, the veteran hitmaker released “I Rise,” the latest promotional single off her forthcoming album Madame X, due out in June.

The song opens with a powerful sample of Stoneman Douglas High School shooting survivor and gun control activist Emma Gonzalez saying: “[They say] us kids don’t know what we’re talking about, that we’re too young to understand how the government works. We call B.S.!”

Later in the song, Madonna sings:

There’s nothing you can do to me that hasn’t been done
Not bulletproof, shouldn’t have to run from a gun
River of tears ran dry, let ’em run
No game that you can play with me I ain’t won

In an interview with Rolling Stone, Madonna said she wrote the song “as a way of giving a voice to all marginalized people who feel they don’t have the opportunity to speak their mind.”

While the track may not be specifically about gun violence (at least, according to Madonna), merely including Gonzalez’s voice and message makes it so by default. And that’s where things get a little awkward.

Because for the last 20 years, Madonna has frequently romanticized guns and gun violence in her artistry.

Later in the song, she sings:

The song ends with her shouting for her ex-lover to “Die, bitch!” before she ultimately says, “Now, if you’re gonna act like a bitch, then you’re gonna die like a bitch,” followed by the sound of a gun popping off.

Madonna performed the song on her MDNA World Tour while parading around the stage with a semi-automatic, pretending to kill various assailants in an absolute bloodbath before turning the barrel on the audience.

That song, too, ends with the sound of a shot being fired and was performed during certain legs of the MDNA World Tour, also while she wielded a gun, at times pointing it directly in the faces of front row audience members.

In her 2009 single “Revolver,” off her greatest hits compilation album Celebration, Madonna literally compares sex with her to death by gunfire, singing:

But her fascination with handheld weapons and shooting people isn’t a new thing. It’s been going on for years.

Depictions of guns, knives, and warfare were a huge part of the promotional campaign for her 2003 album American Life, in which she portrayed herself as a cross between Patty Hearst and Che Guevara. 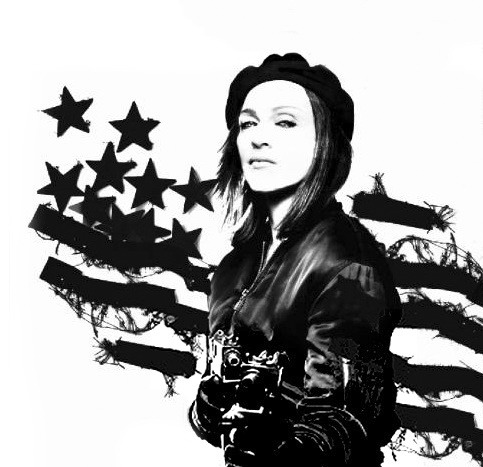 It was also included in the music video for her 2002 single “Die Another Day,” from the James Bond film of the same title, in which she can be seen combating her evil twin, ultimately killing her with an arrow to the heart.

And in the music video for her 2001 single “What It Feels Like For A Girl,” from her 2000 album Music, she is depicted going on a violent rampage, tasering a man and pointing a pistol at two police officers before kidnapping and killing an elderly woman in a murder-suicide.

But it’s not just in Madonna’s music videos and live performances where deadly weapons and other violent imagery are depicted and even glorified.

In 2013, she received criticism for releasing the 17-minute film SecretProjectRevolution just days after the deadly mass shooting in the Washington D.C. Navy Yard.

In one scene, she is seen standing in a roomful of corpses clutching a revolver in her gloved hand. In another, she is seen shooting a man point blank in the head. 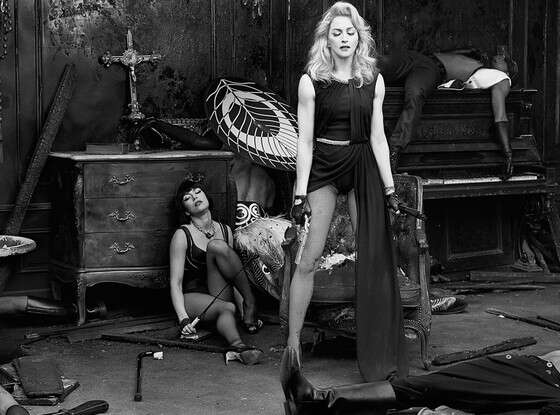 Then there was that time in 2017 when she posted a cheeky photo of herself with armed military police in the favela of Rocinha in Rio de Janeiro just two days after officers murdered a tourist in the same area.

Many social media users accused her of glamorizing violence and police brutality. Madonna never responded to the criticism and the photo remains up on her Twitter page to this day.

All that being said, it’s a little jarring to have her suddenly playing the part of a passionate crusader against gun violence in America, using her platform to broadcast the voice of a young woman who witnessed her friends being murdered in a classroom, and singing about how no one should have to “run from a gun.”

That’s not to say Madonna shouldn’t speak out against gun violence. She should! Everyone should. It’s a serious problem. But, in Madonna’s case, a little reconciliation needs to happen first.

She has literally spent the last 20 years (Gonzalez’ entire lifetime thus far) sexualizing and, in turn, profiting from the very thing she’s now decrying. Madonna’s heart is no doubt in the right place. Let’s just hope her head gets there, too.

Madame X will be released on June 14.