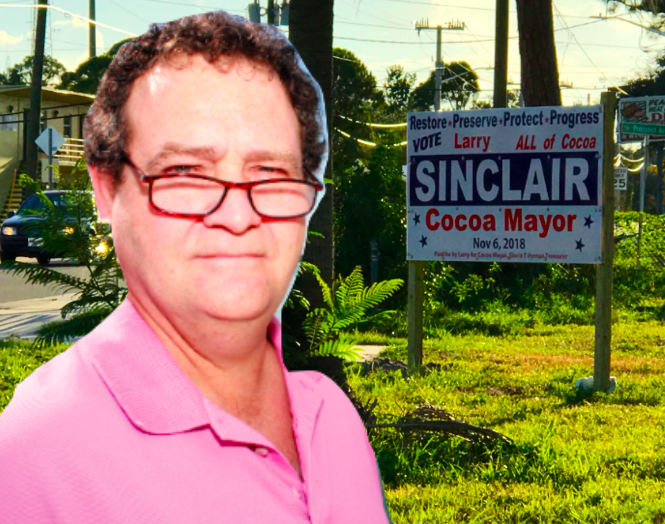 Larry Sinclair. Remember him? No? He’s the convicted felon who received national media attention during Barack Obama‘s first presidential campaign when he claimed he engaged in a two-day, crack-fueled sex romp with Obama back in the late ’90s. Now, he’s running to be mayor of Cocoa, Florida (pop. 17,000). And he might actually win.

Sinclair is running against Cocoa City Council member Clarence Whipple Jr. and former City Council member Jake Williams Jr. Of the three candidates, he has raised and spent more money than both of his opponents combined, although it should be noted that much of that money came from Sinclair’s own bank account.

He also has endorsements from the Coastal Florida Police Benevolent Association and the Laborers’ International Union of North America, and he has the support of the city’s current mayor, Henry U. Parrish III.

I want to do for all of Cocoa what I have been able to do for its oldest developement Broadmoor Acres. As Mayor of Cocoa I will work everyday at getting positive results for all of Cocoa today. Dear Cocoa Residents: I moved to Cocoa from Daytona Beach/Holly Hill area to save a house in the Broadmoor Acres community from being demolished by the city. Shortly after purchasing my home it was broken into and gutted of all its electrical wiring, plumbing and the interior walls and ceilings were destroyed. I moved into my house with a working tub and toilet and one bedroom usable and have rebuilt it from the slab up. Since moving to this community I have had great success in bringing the Broadmoor Acres Community together, homeowners and renters alike, and improving it for all who call it home. I hope to do the same for all of Cocoa that I have accomplished for Broadmoor Acres in this time of highly partisan politics. As Mayor I want to bring the City together where all citizens are treated equally and fairly; where the rules apply to everyone; where we look at public/private partnerships to restore the very core of this city where every part of the city has skin in the game in how our city pays for services and improves all our quality of life. What I bring to this election is a clear distinction from my opponents: I do not owe anyone anything; I have a proven track record of getting results; I have done everything I said I would do since coming to Cocoa; and I hold myself to the same rules and standards as everyone else. I know that we will not all always agree with each other but we all need to be willing to listen and take all points of view into consideration. For far too long Cocoa has had the same people recycled over and over again in elections with citizens expecting a different result. On Nov 6, 2018 you have the opportunity to step up to a new face and put the used to rest. I am available 24 hours a day 7 days a week on my cell at 321-417-4213; you can email me at larry@larry4cocoamayor.com; find me at www.larry4cocoamayor.com on FB @LarryCocoa20182020 and on Twitter @Larry4M. I am more than happy to answer any of your questions, meet with you and speak between now and election day. I am asking Cocoa residents to take a stand and vote for a change in how things are done in Cocoa and elect me your next Mayor. I promise you that if I have not accomplished everything I said I will at the end of this 2 year term I will not even consider running for a full 4 year term in 2020.

Over the years, the 57-year-old, who has never held public office before in his life, has racked up quite a rap sheet that includes a series of convictions and jail time served in Arizona, Colorado, and Florida.

Sinclair, a Camden, South Carolina, native, has admitted to a background that includes multiple convictions, including for forgery, fraud and larceny. He and his life of crime came to national prominence at a National Press Club news conference in 2008, when Sinclair alleged that Obama, when he was an Illinois state senator, smoked crack cocaine and engaged in gay sex with him on two occasions in 1999.

The 202-page book claims to be a “no-holds-barred, 100% true story” about Obama’s “homosexual affairs and the December 23, 2007 murder of Barack Obama’s former lover and choir director of Obama’s Chicago church of 20 years, Donald Young.”

This searing candid story begins with Barack Obama meeting Larry Sinclair in November, 1999, and subsequently procuring and selling cocaine, and then engaging in consensual, homosexual sex with Sinclair on November 6th and again on November 7, 1999. You’ll read in riveting detail how Sinclair, in 2007, repeatedly contacted and requested that the Obama campaign simply come clean.

In February 2008, Sinclair failed a lie detector test relating to questions about his alleged relationship with Obama, though he insists to this day that the story is true. When asked about the book last week, however, Sinclair would not comment.

“I don’t need to say anything more,” he said. “My book speaks for itself, and I do not backtrack anything that I said at that press conference.”

As for his very long criminal record, Sinclair chalks that up to “stupid decisions” made when he was younger.

“I don’t hide from anything I’ve ever done in my life, and I don’t excuse it, and I’m not hiding from it now,” he says. “I am very open about who I am, what I have done and what I am doing and will continue to do regardless of how this election turns out.”

If he wins tomorrow’s election, it is believed Sinclair will be the first convicted felon ever elected mayor of Cocoa, Florida.

He will also be the first person ever elected to any public office anywhere in the country who once failed a lie detector test about having gay sex with Barack Obama.