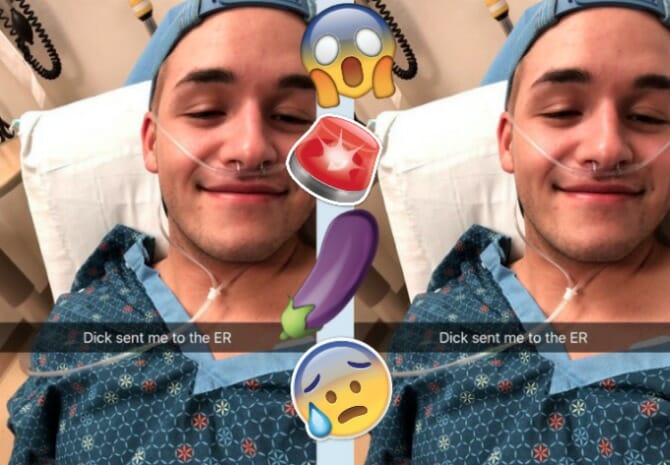 We’ve all heard the phrase “Go choke on a d*ck!” Well, 19-year-old Fredy Alanis took that a bit too literally and ended up spending half a week in the hospital. Now, he’s sharing his take of woe with the world.

In a recent tweet that has now gone viral, Alanis explains what happened. It all started back in January when he hooked up with a dude he met Grindr.

Alanis says the guy, who was his neighbor at the time, had a “hulk-sized d*ck” that ended up rupturing his airway and sending him to the hospital.

He spent three days under medical care, giving him ample opportunity to take a few selfies in his hospital gown:

Excuse the bad angle but remember when I sucked a hulk sized dick and ended up in the ER afterwards LMFAO never forget pic.twitter.com/dvaEITTcVs

So THAT’S the Dick Energy everyone is talking ab

this is the person I aspire to be

In an interview with Them, he explains:

After everything had happened, I felt it was just this soreness in my chest. Nothing really hurt that bad. I thought, maybe my chest is just sore from what took place, and I didn’t think anything of it. I woke up the next morning, and the pain was still in my chest and it was sharp. I was hunched over and crying.

Luckily, Alanis made a full recovery. He’s back on Grindr and enjoying his 15 minutes of internet fame.

“They say I’m iconic and a legend,” he says. “They’ve said I’m their leader. They’re posting some crazy ass comments and honestly I’m just going along with it because I’ve never experienced anything like this before.”