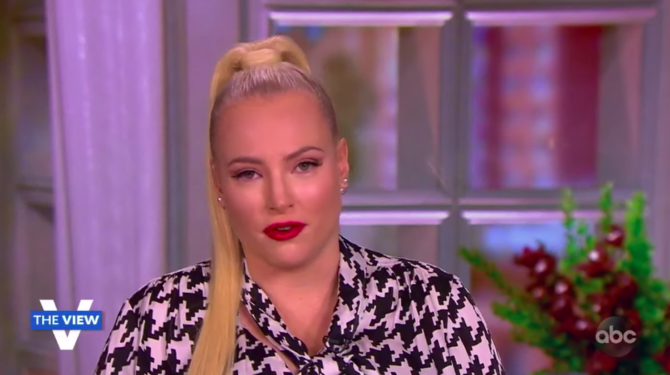 New mom Meghan McCain returned to The View this week after taking some time off for maternity leave and–surprise!–she’s already arguing with her co-stars about how liberals need to be more tolerant of other people’s intolerance.

During a heated debate on yesterday’s show, McCain argued that people need to start being kinder to Trump supporters.

Sure, they might support a candidate who holds racist beliefs, picked a raging homophobe to be his a running mate, played down a deadly pandemic at the expense of 350,000 American lies and counting, and continues to undermine the results of the 2020 Presidential Election, but that doesn’t mean they’re bad people!

“The rhetoric and the media needs to be more respectful of Trump voters,” McCain argued, “and I think that’s how we got to this place, to begin with.”

Honey, the media hasn’t demonized Trump supporters. They’ve done that to themselves with their “No masks” signage and Confederate flags and by storming into government buildings with AR-15s and so on.

“Going forward in 2021,” she continued, “I think that we need to be respectful of the 70 million Americans that for whatever reason did not feel that they could in good faith pull the trigger for President Biden and Vice President Harris.”

That’s when Joy Behar jumped in to say, “Meghan, don’t you think a lot of those people are watching Fox? And getting their news from sources other than legitimate sources? Come on!”

For the record: Just because someone doesn’t want to be called racist doesn’t mean they’re not racist. Voting for a birther who calls white supremacists “very fine people” is an act of racism itself.

Whoopi Goldberg then flipped the script on McCain by saying, “Respect the people who voted for Biden and let him take his place. People always want respect, but they don’t want to give it.”

She continued, “This is the bitch of being in a democratic society. This is what it is. Sometimes you win and sometimes you lose. We lost four years ago now. He’s lost this year. You’re not allowed to kvetch and poop all over this. This is not the American way.”