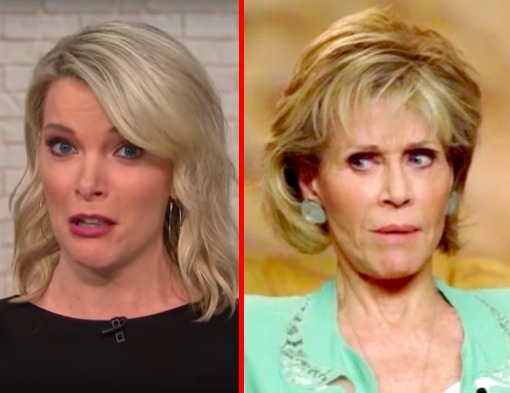 Megyn Kelly lashed out at Jane Fonda on her show this morning, accusing the Hollywood legend of being anti-American and saying she has no business lecturing her, or anyone else, on what qualifies as offensive.

It all stems from last September when Fonda appeared on Kelly’s show to promote her film Our Souls at Night and was instead grilled by Kelly about all the plastic surgery she’s had. Fonda, understandably, wasn’t too happy with the line of questioning and made her feelings known, prompting Kelly to retreat back into her shell and hide in shame…

Kelly decided to address last fall’s drama with Fonda on her show this morning… nearly five months after the fact. Evidently, that’s how long it took her to work up the courage.

“And now a word on Jane Fonda,” Kelly said at the top of the show, “who appears to be fixated with an exchange I had with her months ago on this show.”

“Look, I gave her the chance to empower other women, young and old, on a subject that she purports to know well and she rejected it, but that’s OK.”

Kelly then said she is “not in the market for a lesson from Jane Fonda on what is and is not appropriate.”

Related: Jane Fonda has even more words for Megyn Kelly

“Look at her treatment of our military during the Vietnam War,” Kelly blabbed. “Many of our veterans still call her ‘Hanoi Jane’ thanks to her radio broadcast where she attempted to shame American troops.”

Kelly then offered a laundry list of all the horrible un-American things Fonda did 40+ years ago.

“By the way,” Kelly says, “she still says she’s not proud of America. … She has no business lecturing anyone on what qualifies as offensive.”

We’d like to see Kelly actually say this stuff directly to Fonda.