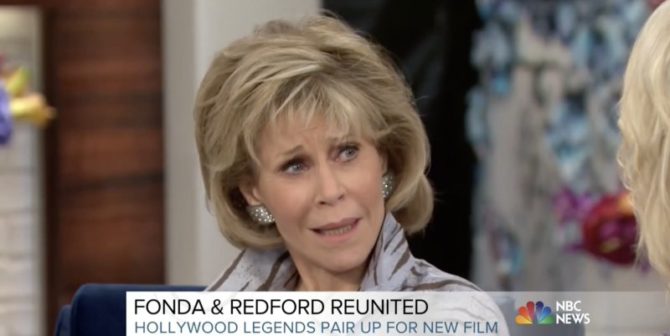 It’s only the third installment of Megyn Kelly’s daytime talk show, and the former Fox News commentator is already finding herself putting out fires.

On Monday she made some ill advised gay jokes, and on Wednesday she asked guest Jane Fonda basically the one question she didn’t want to answer.

Fonda and longtime friend Robert Redford appeared on Kelly’s show to promote their new Netflix film, Our Souls at Night, but Kelly had another agenda to discuss — Fonda’s plastic surgery.

“We really want to talk about that now?” replied Fonda, trying her best to keep composed.

Then Fonda gave a sort of canned answer to the question before quickly changing the subject back to her film. And that’s why she’s a pro.

“Well thanks. Good attitude, good posture, take care of myself,” she said. “But let me tell you why I love this movie that we did, Our Souls at Night, rather than plastic surgery.”

Below, find a segment Kelly produced on Fonda during her Fox News days, followed by the TODAY segment:

And as a bonus, here’s John Oliver’s exploration into Megyn Kelly’s absurd assertion that she’s here to be a “unifying force”: