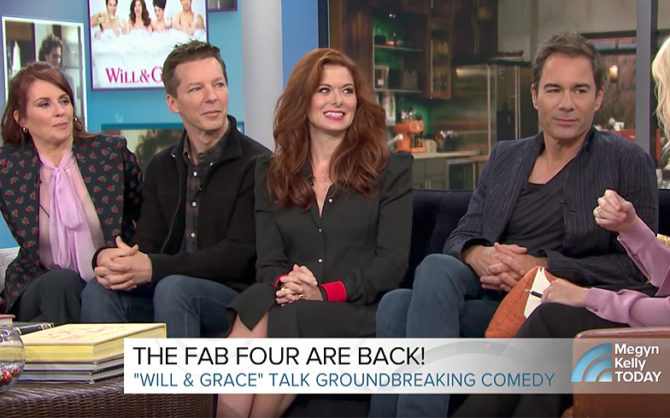 So you’ve probably heard by now that Will & Grace is returning to NBC this week. What you may not have heard, however, is that former FOX News host Megyn Kelly launched a new morning show yesterday, and let’s just say things didn’t go over so well.

For the pilot episode of Megyn Kelly Today, Kelly interviewed the cast of Will & Grace, who couldn’t have appeared less thrilled to be there, ahead of their big return to television.

Many people already thought it was a strange pairing given Kelly’s looooong history of anti-LGBTQ rhetoric, but it got even stranger when she called for Will & Grace superfan Russell Turner to join them on stage.

Turner, a lawyer, excitedly jumped up from his seat in the audience. After he had finished hugging each of the cast members, Kelly proceeded to interview him. Her first (and only) question was: “Is it true that you became a lawyer, and became gay, because of Will?”

Related: “Will & Grace” just announced one hell of a guest star

Turner managed to laugh off the homophobic question. Unfortunately, the awkwardness didn’t stop there. Kelly then said: “I don’t know about the lawyer thing, but I think the Will & Grace thing and the gay thing is gonna work out great!”

Watch the uncomfortable moment below…

Here is Megyn Kelly telling a gay #WillAndGrace superfan, "I think the 'Will & Grace' thing and the gay thing's gonna work out great." ??? pic.twitter.com/KyN9kVQ0rK

And the award for most cringeworthy talk show debut goes to.. Megyn Kelly for asking a Will & Grace fan if the show is why they "became gay" pic.twitter.com/Ij3LjDpEox

Megyn Kelly is every mom trying waaaaay to hard to "relate" to her gay son but instead just makes it waaaaay worse pic.twitter.com/dh2sSi2kVq

If you're not watching Megyn Kelly's morning debut right now . . . It's one of the more mortifying things I've seen in a while

For the first time in my life I'm figuring out what else is on tv in the morning besides @todayshow because of Megyn Kelly.

"I think the Will & Grace thing and the gay thing are going to work out great," Megyn Kelly said to a gay W&G superfan this morning. Really.

Megyn Kelly made her career promoting hate and fear, and now wants to rebrand herself as the bringer of optimism and hope.

Nothing is worse than Megyn Kelly awkwardly making ‘gay jokes’ in the morning https://t.co/cEvIHoyFic