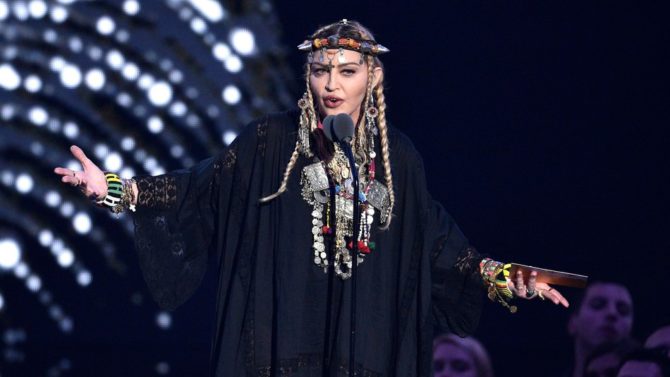 So Madonna gave a tribute to Aretha Franklin at the 2018 MTV Video Music Awards last night and it was about what you might expect.

Dressed in a long black kaftan with African jewelry and spiky headgear, the Queen of Pop gave the sendoff to the Queen of Soul as only she could: by talking about herself the entire time.

“Aretha Louise Franklin,” Madonna said at the beginning of her speech, “changed the course of my life.”

What followed were several incredibly boring minutes of Madonna recounting how she left Detroit when she was 18 with just $35 in her pocket, her dreams of becoming a professional dancer, all the auditions she went on, the time she met a French disco singer, a plug for her last album Rebel Heart, and how her goals eventually shifted from being a dancer to being a singer, which eventually led to story about an audition she went on for two record producers, which is when she finally got around to actually mentioning Aretha Franklin.

“The dance audition went well. Then they asked me if I had sheet music and a song prepared. I panicked. I had overlooked this important part of the audition process,” Madonna recalled.

Related: Aretha Franklin has been immortalized forever with these amazing memes

Understandably, people were not pleased about the whole thing. Many took to Twitter to express their feelings about it…

Me: It’s weird that #Madonna is doing a tribute to Aretha Franklin, but what’s the worst that could happen?

Prince is up there telling Aretha she effed my tribute up too!! #Aretha or Madonna pic.twitter.com/AUdiDpOMBN

Madonna made Aretha Franklin’s death about herself and her own musical journey, and honestly, this is some of the whitest shit I have ever seen. #VMAs

Madonna doesn’t have the vocal range to do a tribute to anything but the wind.

Madonna dressing up as my ancestors at the vma’s lmaooooo did she find out she’s 1% moroccan? pic.twitter.com/eXc8p7H8Fa

Madonna really gentrified an entire tribute to Aretha with more anecdotes than a Presidential candidate. You gotta be kidding me… #VMAs

Madonna talking about guitar lessons, Paris baguettes and her ass hanging out while she looked for a stiletto with the image of Aretha Franklin behind her is everything I expected from the #VMAs

And then there were the memes…

Whoever thought #Madonna would be the right choice to pay homage to #Aretha was clearly trippin. You can’t expect an egomaniac to speak of anyone but themselves. These woman may have played in the same court but one is The Queen and the other is just a Court Jester! #2018MTVVideoMusicAwards #Fail #TheQueen #TheJester

A post shared by GangsterSaysRelax (@houseofgangstersaysrelax) on Aug 21, 2018 at 8:58am PDT

#madonnavmas … I see you. Only one, really important question today… Who wore it best?. . . #vmas #vmas2018 #madonna #avatar

After seeing the clips of Madge making her VMA Aretha ‘tribute’ all about herself….I made a thing… ? . . . . . #Madonna #Aretha #MTV #VMAs #BitchImMadonna #QueenOfSoul #arethafranklintribute

Don’t be mad, ‘toine! Of course she only talked about herself. #madonna #vmas #gay