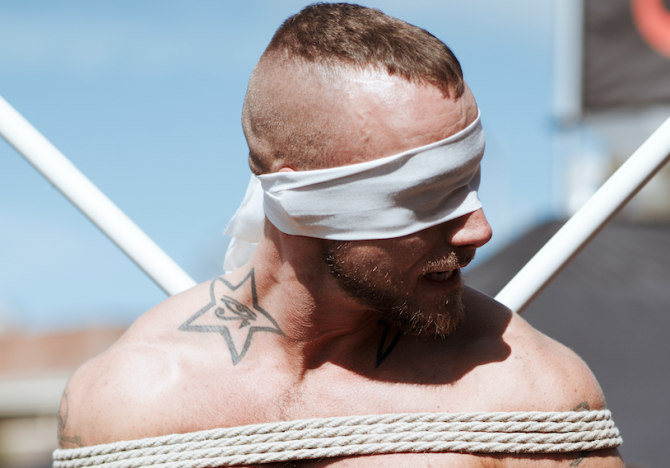 A man has been acquitted of entering a home armed with a weapon in a case that the presiding judge called, “unusual.”

The incident in question took place in July 2019 in New South Wales, Australia. A man living near the city of Griffith used Facebook to hire two men to ‘break’ into his house and fulfill a role-play, sexual fantasy: He wanted to be stripped to his underwear, tied up and stroked with a broom.

Problems arose when the man moved home and failed to update the guys he’d been negotiating with that he now lived 30 miles away from the address they had for him.

Because of this, the men turned up to the original street and broke into a home at that address.

The man living at that address woke up at around 6.15 am, removed the sleep apnoea mask he was wearing and was greeted by the sight of two men carrying machetes.

The machetes were props they’d brought along as part of their role-play.

They asked the resident to confirm his name. Quickly realizing their mistake, one of the men said “Sorry, mate” and shook the victim’s hand, before departing. The other simply said, “Bye.” The resident contacted the police after they’d left the property.

The intended client then called the men to find out their whereabouts.

The men, with their driver, then made their way to the correct address, where the man who’d hired them asked them to leave the machetes in their car. Apparently, they hadn’t needed to bring them.

A short while later, police turned up at the address and found the machetes in the vehicle. The client had cooked breakfast for his guests, and one of them, Terrence Leroy of Sydney, had then fallen asleep on a couch.

Police said the man who hired the men to break into his home had a “history and proclivity for engaging the services of people,” reports Sky News.

A lawyer for Leroy argued the use of machetes was not intended to intimidate: “It was a commercial agreement to tie up and stroke a semi-naked man in his underpants with a broom. Entry was not with intent to intimidate.”

District Court Judge Sean Grant agreed, saying, “They carried the machetes either as a prop or something to use in that fantasy. The fantasy was unscripted and there was discretion as to how it would be carried out.”

The judge also conceded, “the facts of the case are unusual.”