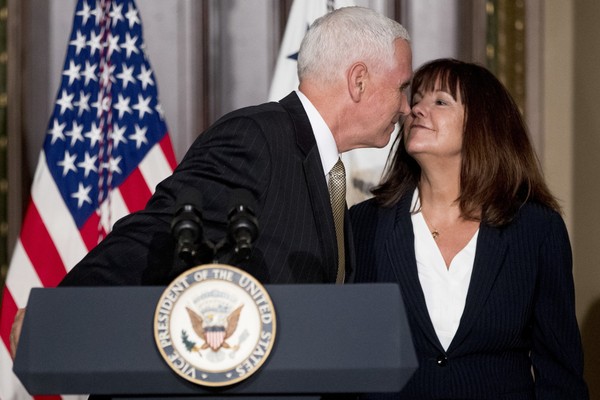 Mike Pence is deeply offended. This ought to be good.

The vice president clutched his pearls in a new interview with EWTN host Lauren Ashburn, lashing out at critics who dared to question his wife’s new gig teaching at a school that bans LGBTQ students and faculty.

Can’t you see the Pence family are the real victims here?

“My wife and I have been in the public eye for quite a while but I have to tell you, to see major news organizations attacking Christian education is deeply offensive,” he said.

“We have a rich tradition in America of Christian education and, frankly, religious education broadly defined. We celebrate it,” he continued. “The freedom of religion is enshrined in the Constitution of the United States. The Constitution prohibits a religious test for holding public office, so we’ll let the critics roll off our back.”

Yes, he’ll let the critics roll off his back, riiiiight after condemning them in Christian media.

The school in question, Immanuel Christian School in Springfield, Va., has a “parent agreement” posted on its website that requires any potential employee to solemnly swear they oppose same-sex marriage, and that they do not engage in “homosexual or lesbian sexual activity” or “transgender identity”.

Not only that, in order for a child to attend the school, parents must sign a clause giving the school the power to discontinue enrollment if the student’s behavior is “in opposition to the biblical lifestyle the school teaches.”

“I understand that the school reserves the right, within its sole discretion, to refuse admission to an applicant or to discontinue enrollment of a student if the atmosphere or conduct within a particular home, the activities of a parent or guardian, or the activities of the student are counter to, or are in opposition to, the biblical lifestyle the school teaches,” the agreement states.

“This includes, but is not limited to contumacious behavior, divisive conduct, and participating in, supporting, or condoning sexual immorality, homosexual activity or bi-sexual activity, promoting such practices, or being unable to support the moral principles of the school. (Lev. 20:13 and Romans 1:27.) I acknowledge the importance of a family culture based on biblical principles and embrace biblical family values such as a healthy marriage between one man and one woman. My role as spiritual mentor to my children will be taken seriously.”

A spokeswoman for the Second Lady called the backlash “absurd.”