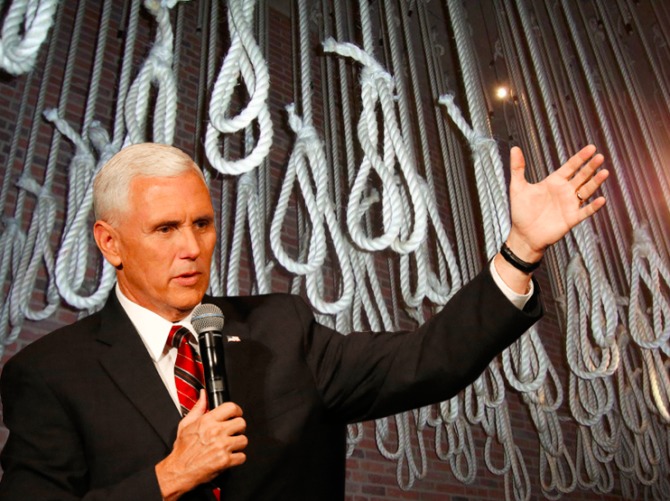 The New Yorker just published a damning profile on Mike Pence and his relationship with Donald Trump, and it includes an alleged incident in which Trump “jokingly” said Pence wants to “hang all the gays.”

Another source said the two men have a close “friendship” but that Trump gets his kicks “[letting] Pence know who’s boss.”

The profile includes a detailed rundown of Pence’s past antigay actions, including the time he voted for the Marriage Protection Amendment in 2006, a law that would have banned same-sex marriage nationwide, calling it a means of enforcing “God’s idea” that being gay is a “choice,” as well as the time he voted against ENDA, a law to prohibit workplace discrimination based on sexual orientation, claiming it “wages war on freedom and religion in the workplace.”

But the most alarming part comes in an alleged conversation Trump and Pence had with a legal scholar on how they might roll back the rights of women and minorities.

Related: Mike Pence tweets that he wants a horse “inside” him and all of Twitter freaks out

During a meeting with a legal scholar, Trump belittled Pence’s determination to overturn Roe v. Wade. The legal scholar had said that, if the Supreme Court did so, many states would likely legalize abortion on their own. “You see?” Trump asked Pence. “You’ve wasted all this time and energy on it, and it’s not going to end abortion anyway.” When the conversation turned to gay rights, Trump motioned toward Pence and joked, “Don’t ask that guy—he wants to hang them all!”

Let’s take another look at that last part…

When the conversation turned to gay rights, Trump motioned toward Pence and joked, “Don’t ask that guy—he wants to hang them all!”

A recent survey conducted by Queerty’s sister site, LGBTQ Nation in conjunction with the polling firm SurveyMonkey, found that 45% of LGBTQ people feel as though they are treated differently because of their sexuality or gender identity since Trump took office.