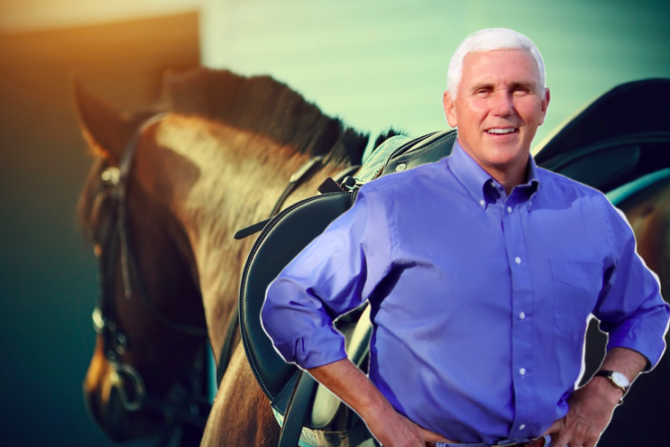 This is a thing that actually happened.

On Friday afternoon, the current Vice President of the United States of America tweeted a picture of himself standing beside a white horse, along with a head-scratching caption:

Outstanding afternoon. "I've often said there's nothing better for the inside of a man than the outside of a horse." -Pres. Reagan #VPinMT pic.twitter.com/vagCjbLnxD

Pence was taking a horseback tour of the Absaloka Mine near Hardin, Montana along with the Crow Nation tribal leaders, Montana Senator Steve Daines, and Secretary of Interior Ryan Zinke.

The internet shared a collective “WTF” moment as they tried to make sense of the tweet, particularly of Pence’s use of a Ronald Reagan quote very few people remember and that some say might actually be from Winston Churchill.

Then, of course, there was the beastialic undertones of the whole tweet, which are ironic coming from a homophobe who once served on the board of an antigay group that compared homosexuality to beastiality and incest, among other things.

Naturally, the rest of Twitter had a field day over the V.P.’s post. Check out what they’ve been saying…

I wish Mike Pence would just play it cool if he wants to date me https://t.co/3Udjyu5rtB

@VP Lol what does that even mean? Are you sleeping with the horse

Centaur: daddy, where do baby's come from?

Mike Pence said 'There's nothing better for the inside of a man than the outside of a horse'… Can he go horseback riding without his wife?

Mike Pence: "gay marriage is evil. homosexuality is an abomination."

still thinking about how mike pence bottomed for a horse

@nycsouthpaw Mike Pence and a horse walk into a bar.
Bartender says, “why the long face?”
The horse says, “he’s a little rattled by recent events.”

It must be exciting for Mike Pence to get fucked by the same horse that used to fuck Reagan.

Serious question: Is Mike Pence allowed to dine alone with a female horse?

Up the Annie
8 comments