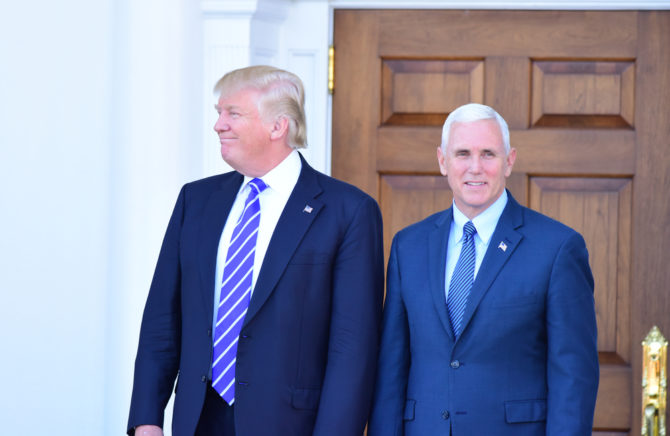 In case you were wondering how Mike Pence feels about Donald Trump‘s horrendous comments regarding the white nationalist rally that happened in Charlottesville over the weekend, he just said that he’s he’s A-OK with them.

Pence, who it is looking increasingly likely will become our next President if/when #45 is impeached, has been in South America meeting with leaders in various countries all week. He was asked about Charlottesville at a conference in Chile earlier this morning.

“What happened in Charlottesville was a tragedy, and the president has been clear on this tragedy and so have I,” Pence told reporters. “I spoke at length about this heartbreaking situation on Sunday night in Colombia, and I stand with the president and I stand by those words.”

Did you catch that, folks? He stands with the president and his words.

What were those words, exactly? Here’s a snippet:

As Brian Levin, director of the Center for the Study of Hate and Extremism at California State University, San Bernardino told The New York Times, comparing the violence perpetrated on both sides is like “comparing a propeller plane to a C-130 transport.”

“Using the fact that some counter-protesters were, in fact, violent, creates a structural and moral false equivalency that is seriously undermining the legitimacy of this president,” Professor Levin added.

And as former GOP nominee for President Mitt Romney explained on Twitter:

No, not the same. One side is racist, bigoted, Nazi. The other opposes racism and bigotry. Morally different universes.

In his response today, Pence also had the audacity to say he and his family are “praying” for Heather Heyer, the 32-year-old woman who was killed.

Pence’s office said he will be ending his South American trip early and returning to Washington tomorrow to attend the president’s meeting at Camp David.