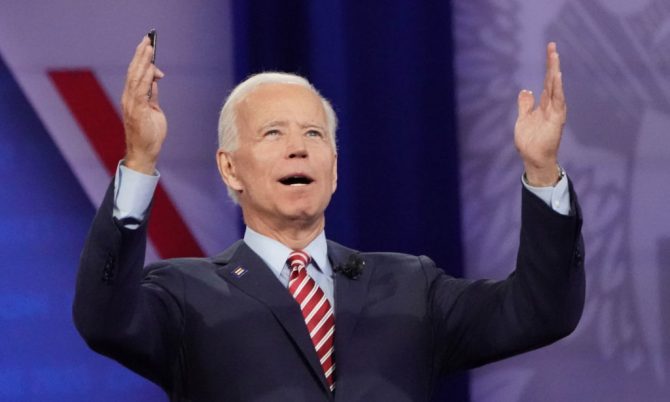 There were a few awkward moments during CNN’s Equality Town Hall last night. But perhaps the most awkward was when Joe Biden went on a bizarre tangent about gay men having “round the clock” sex in 2004. The remarks came after he was asked about new HIV infections in communities of color, particularly among gay Black men in the South.

Christopher Hucks-Ortiz, the director of social services for Dignity Health at St. Mary Medical Center in Los Angeles, asked the former vice president a question about the alarming “health disparities across this country [which] have resulted in higher rates of HIV acquisition among Black people than any other group.”

“What would you do as president to help change this narrative, especially in the South, where 50 percent of all new diagnoses occur?” Hucks-Ortiz asked.

“That is a violation of the law,” he said. “That should not be allowed under any circumstances, number one.”

That part of the answer was fine. But things quickly devolved from there.

The 2020 hopeful went on to once again remind us that he supported same-sex marriage before Barack Obama or Hillary Clinton, in case anyone forgot.

According to Biden, he did so because “57 percent of all Americans supported gay marriage” at the time, not because, oh, you know, it was the right thing to do. Also, just for the record, it was closer to 50 percent, but those details, Biden says, don’t really matter.

Many people would argue that being “afraid” of LGBTQ people is kind of the definition of homophobia, but we’ll let that one slide. What we’re really confused about is what any of this has to do with gay Black men in the South living with HIV.

Things got weirder still when the former veep began musing over some hypothetical waiter who was bullied “eight or 10 years” ago for being gay. Biden claimed that wouldn’t happen today because same-sex relationships are now “normal,” “normalized,” “not anything strange,” and “not strange.”

“Back 15, 20 years ago in San Francisco was all about gay, gay bathhouses,” he rambled on. “It’s all about around-the-clock sex. It’s all — come on, man. Gay couples are more likely to stay together longer than heterosexual couples.”

Biden seems to have confused San Francisco “back 15, 20 years ago” with San Francisco back 35, 40 years ago, during the height of the AIDS epidemic, when, in 1984, the San Francisco Health department ordered all gay bathhouses in the city be shuttered.

Thankfully, that’s when Anderson Cooper, who was moderating the event, finally stepped in to say, “We’re going to leave it there, Mr. Vice President.”

Yes, let’s leave it there.

Joe Biden says 15 years ago in San Francisco "it was all about gay bathhouses & 'round the clock sex."

But monogamy should not be a requirement for someone to enjoy equal rights pic.twitter.com/3CZWJtZmSN

Like it doesn’t matter what larger point @JoeBiden thought he was making, who in the hell let him get on stage and talk about round the clock sex and bathhouses?

Listen I would have been fine going my entire life without hearing Joe Biden day “gay bathhouses! Round the clock sex!” but here we are.

Anyways, go to a bathhouse and have as much sex as you want. Queer liberation doesn’t mean monogamy!

Joe Biden rambling incoherently about gay bathhouses and "round the clock sex" just raised the bar for presidential candidates.

Joe Biden says “15-20 years ago, in San Francisco, it was all about gay bathhouses and round-the-clock sex.”

“What will you do to ensure black members of our community will have greater access to health care?”

“Let me tell you about gay bathhouses!”#EqualityTownHall

Can we never ever ever have @JoeBiden mention bathhouses again. Thanks. #EqualityTownHall #panderingthewrongstall