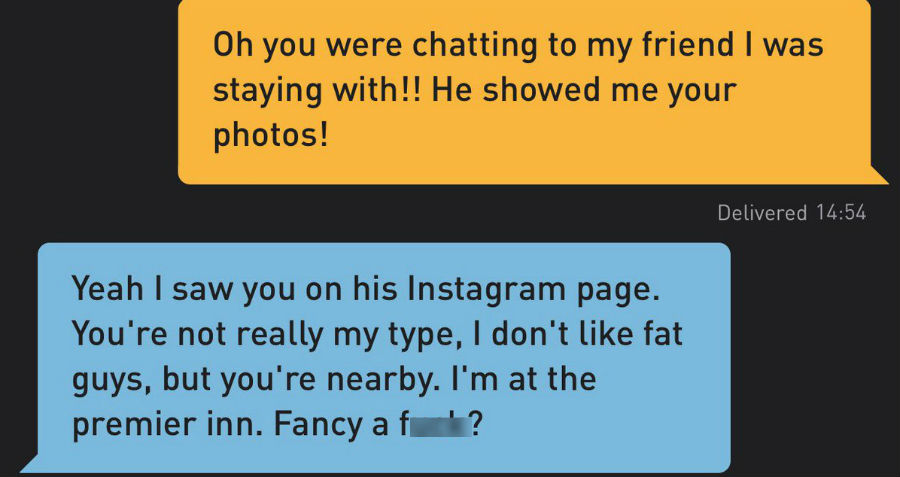 As we approach Valentine’s Day, now seems as good a time as any to remind everyone to be kind and respectful to others online.

A Twitter user has prompted many comments after sharing a Grindr message he received. The man messaging him was inviting him over for sex. However, it was how the invitation was worded that has prompted raised eyebrows.

Danny Whitehead (@danielswhi) is based in Scunthorpe in England. On Sunday, the 35-year-old was hanging out with a friend in a hotel. They both received messages from the same guy on Grindr.

When Danny received a message, he responded, “Oh you were chatting to my friend I was staying with!! He showed me your photos!”

The message he received in return said, “Yeah I saw you on his Instagram page. You’re not really my type, I don’t like fat guys, but you’re nearby. I’m at the premier inn. Fancy a fuck?”

Excuse me while I go cry in the shower. And eat my body weight in chocolate. pic.twitter.com/6fPGXx0sEe

Danny was taken aback by the bluntness of the message. He went on to post, “It did get to me a bit. Ever since I was a kid I’ve had issues with my weight, but then last year I got on a health kick and lost 5 and a half stone [77lbs].

“So to have someone call me that brought back all my insecurities for a time… but I’m good now!”

Related: Man travels from London to Helsinki for Grindr hookup

He says he didn’t reply to the message and instead blocked the person.

“What the hell is wrong with people?” wondered fellow Twitter user @leewelshman.

“This screams “I really don’t like myself” on his part,” offered @JDEdge. “Don’t feel devalued or somehow inferior because this person, whom likely has a warped sense of decency, sent you a shitty message on a hookup app. You’re fab, stay fab.”

“I’ve been Grindr free now for 2 months. Thank you for reminding me EXACTLY why I need to stay clear from that hell hole of an app. Honestly, it’s not worth your time man, Grindr is where all the ultra muscle masculine inside homophobic gays live. The app is like a drug,” said @KyngLeo98.

“That’s just wrong on so many levels… also clearly he has poor taste with his choice of hotel, so f**k him! Actually don’t that’s what he wants,” said @UrbanMaleUK.

Danny told Queerty he only joined Grindr last June. Before this he’d been in a long-term relationship with someone since the age of 17.

“This message was the first where someone has said something nasty, most people have been very complimentary – along with the odd random picture of genitalia that makes me laugh. I actually enjoy the app mainly, as it entertains me with some of the stuff people say.”

Related: His super hot doctor just hit him up on Grindr… now what?!

Providing more background on the exchange, he said, “On Sunday my friend was working away in Nottingham and had a hotel, so I went over and we spent the night watching TV and drinking decaf tea (wild, I know!) and this guy started messaging him.

“He was really good looking and was trying to get my mate over to his room, and my mate said ‘No.’

“On Tuesday I woke up after night shift and the guy had messaged me asking if I had been at the hotel on Sunday because he recognized me from my mate’s Instagram. He sent a couple of photos of his face to which I replied [with the message in the Twitter image].

Talking about his weight loss and experiences on apps, Danny went on to say that as recently as August 2018, he weighed 18 stone [252 lbs]: “And for someone who is 5 foot 8, that’s way too much.

“I joined an inclusive rugby team in Hull near where I live, and that along with a proper diet helped my lose 5 and a half stone pretty quickly, and I’ve managed to keep that off mostly.

“When I was still that big, I wasn’t on the apps so I can’t say if my online experience would have changed. However, I know my confidence has grown massively since then and I am I big believer that personality and confidence are sexier than a great body.”