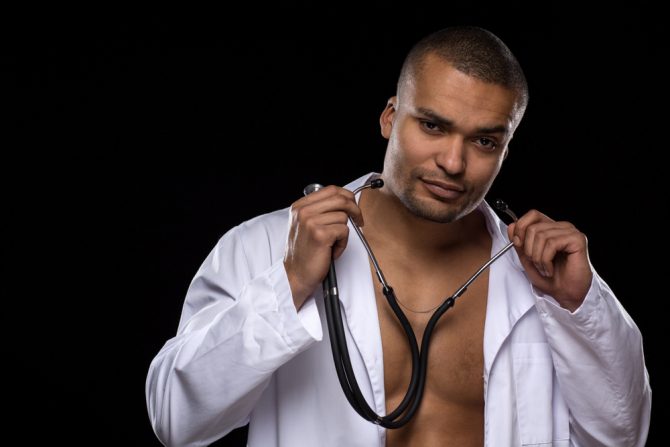 A 29-year-old gay man says he’s caught between a rock and a hard place. After years of looking for a good primary care provider, he finally found one. There’s just one teensy tiny problem. They’re sexually attracted to each other! So he’s seeking wisdom from Stoya and Rich Juzwiak over at Slate.

“I have been searching forever for a primary care provider that would listen to me and actually care about my health,” the man writes. “I finally found one in Dr. Cee. Dr. Cee is gay, a little older than me, and a total babe!”

Finding a good PCP as a gay man can be a real challenge, so it’s great this guy found one who he trusts and who understands his unique medical needs.

But then something kinda strange and unexpected happened after his last visit.

The man writes: “He hugged me at the end. I didn’t think anything of it until later that week, I saw him on Grindr. I didn’t look at his profile, but he had a face pic and I could tell from the thumbnail that it was him.”

Much to his surprise, Dr. Cee messaged him.

“Things got hot and heavy via chat,” the man writes. “Now I want to hook up with him, but I also don’t want to lose my AMAZING PCP.”

He wonders: “Can I sleep with my doctor and still have him be my doctor? Or have things already been ruined in a professional sense, and now I should just see him outside the office?”

In their response, both Stoya and Juzwiak agree that a doctor approaching a patient on a sex app crosses a line.

“The American Medical Association says this is strictly unethical,” Juzwiak says, citing chapter nine of the AMA’s Code of Medical Ethics, which states:

Adds Stoya, “So maybe this PCP isn’t as amazing as he seems.”

“That said, I do think this is potentially less worrisome in a gay arrangement, if only because the power dynamic isn’t quite as severe in a patriarchical society as man-woman,” Juzwiak counters. “Generally speaking, men aren’t targeted like women are in a predatory way, so I do think it’s possible to emerge from this situation unscathed. But I’m not endorsing it.”

To which Stoya adds, “To be direct: Please don’t do this.”

“Right,” confirms Juzwiak. “Not necessarily a catastrophe in the making, but unwise and worrisome on the part of the doctor.”

Both think the guy should find a new primary care since “a line has been crossed.”

“If one must be picked,” says Juwiak, “I’d say pursue romance. But one is the max here—can’t do both.”