The documentarian first made a splash with his film ApolloniA about notorious Israeli double agent Victor Grayevsky. His new film Family in Transition takes on a different kind of outing: that of an Israeli husband and father who comes out as transgender.

Family in Transition follows the story of Amit and Galit Tsuk, an Israeli couple trying to hold their family together through Amit’s gender confirmation process. Three years in the making, the film portrays Amit’s anxieties during her hormone therapy and leading up to bottom surgery, as well as her wife Galit’s own struggle to recognize her husband as a woman, raise their children and deal with the rising homophobia in contemporary Israel.

Queerty reached out to director Trainin in his native Israel to discuss the film and the pressures of sitting in on a family’s most intimate moments.

So how did you learn about Amit and her transition?

At the time, I had done a few short films about parents of LGBTQ children, and this story just sort of fell into my lap. When I first heard about the Tsuk family, it was just at the beginning of the transition, so I thought their story would make a very interesting film. I called Galit and told her about my experience with the LGBTQ community and that my oldest brother came out of the closet 20 years ago. I wanted the Tsuk family to understand my motivation to make an important film that advocates the acceptance of everyone.

Related: WATCH: These love stories of trans people of color will give you the feels

Were she and Galit reluctant to allow their story to go before the camera?

At first, Amit was reluctant. The first day we came to film, she ran away. When that happened, I just put down the camera and stopped the filming and I just started talking with them. After that conversation, I think they felt that they were in good hands and that I had no intention of issuing a film of gossip, but only something that would do good for the world and teach us all about humanity, tolerance and acceptance of the other.

How long were you with the family?

In total I spent about 3 years with the Tsuk family. I started filming them about 6 months after their process began. By the time I arrived, there was already a level of acceptance by the children and they called Amit mom. Before that time though, the children had refused to refer to Amit as a female and Yardan, her son, even packed a suitcase and wanted to run away from the house.

Israel has something of an image in the US of being very welcoming to LGBTQ people, especially by the standards of the region. Yet the film has examples of homophobia. In general, what’s the Israeli attitude toward the community?

From my previous work, I was familiar with transgender issues and aware that, apart from Tel Aviv, life for a transgender person in conservative Israel can be very difficult and can lead to a lot of negative reactions.  Unfortunately, it is only getting worse, as Israel is becoming more and more conservative, nationalist and a religious society.

The dissolution of Galit & Amit’s marriage is painful to watch. How uncomfortable did things get for you watching their daily lives for so long?

It was very difficult to watch. I initially decided to make this film because of Galit’s choice to stay with Amit. I think this is such a special part of the story to tell. There are a lot of films about transgender people, but few of them touched and focused on the couple and the children, staying together as a unit. But as we continued to film, it was sad to witness the relationship dissolve.

One thing the film makes clear is the struggle of certain traditional elements of Judaism to cope with the modern world and evolving concepts like gender. Since Judaism plays such an important role in Israeli society, how do you think the faith needs to adapt to include transgender people?

My main goal in making this film is to explore the life of this unique family, one that can teach us how to accept the differences in one another. They are a family that breaks social conventions, but also one that re-expands the limits of acceptance and love. I think that people of the faith can align with the overall message of tolerance and loving your neighbor. 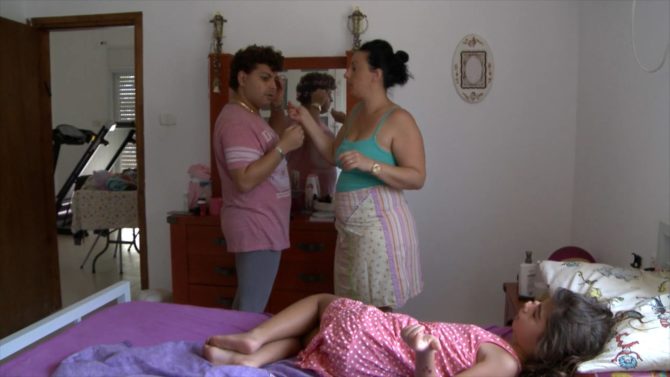 Were there moments you were reluctant to include?

The hardest moments to film were during the divorce. I tried to be gentle and honest because it was sometimes very dramatic.

Amit and Galit have both moved on and are with new partners, as we see in the movie. They still live in Nharia and share custody of their children.

Family in Transition debuts in New York City November 23. A streaming release is pending. Check out an exclusive clip from the film.