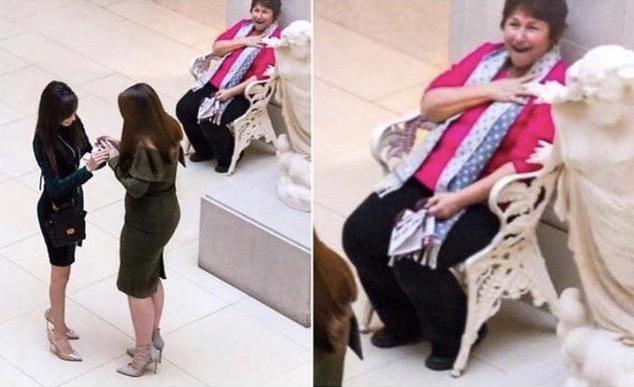 Reddit users recently thrilled to a photo of an older woman gleefully watching a woman proposing to her girlfriend. In fact, the pic has been upvoted more than 12,000 times as of the time of this writing.

Related: Two men, three dogs, one sword collection, and a surprise that would change their lives…

“This made my day,” one Redditor wrote, posting the pics.

“Is there anything on this ear cuter than supportive older folks?” another commented.

Wrote a third: “That’s so wholesome!”

This made my day from lgbt

Turns out, the pics are from a December 2016 upload from Twitter user Carlos Jair, according to News.com.au.

Jair’s sister, Jessica Rodriguez, told the site she was so nervous popping the question to her partner, Chelsea Miller, that she wasn’t aware of the bystanders bearing witness to her proposal. It wasn’t until later that they noticed the older woman’s delight.

“We were going over the photos my friend Ed Sanchez took [and] we discovered that gem with her sweet reaction,” Rodriguez explained. “It really made that photo even more special.”

On Instagram, Rodriguez explained her choice of proposal location: “If someone could describe our love it could only be done through a work of art. It is happy, fun, chaotic, inspiring and strong.” And to her then-fiancée, she said, “I want to keep discovering art for the rest of my life by your side.”

here is another photo pic.twitter.com/3OnWwOqEKS

Jair’s post even got a retweet from Fifty Shades of Grey author E.L. James, who wrote that “everything about this photo is FTW.”

“[We] definitely were not expecting that, or the amount of people that gathered in the gallery to watch and clap for us,” Rodriguez said at the time. “It has been quite shocking and something we are not used to.”