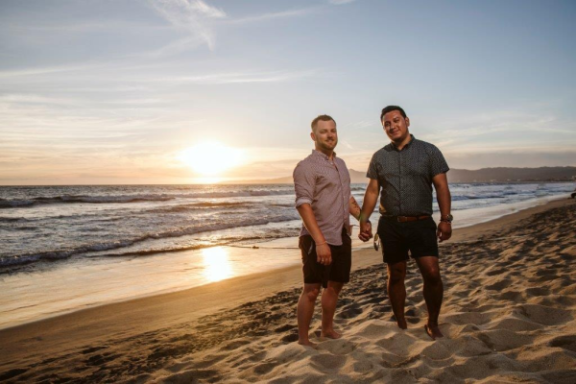 When Brian and Andrew told people they had met while volunteering at a pet shelter, everyone believed them.

However, they weren’t quite being honest. They had actually met as many couples do: online. But as an origin story, “online dating” just didn’t seem to live up to the notion of romance and the tremendous love the two felt for each other.

Brian cooked gourmet meals at home, loved Star Wars, fantasy fiction, and martial arts. He was also a sword and knife collector and even had a few favorite collectors’ items made of intricately patterned Damascus steel.

Brian was head over heels for Andrew, noting that he was the most charismatic person he’d ever met. In fact, he couldn’t think of even one friend or acquaintance who didn’t love being around his boyfriend.

So a few months in, they had a talk and it was decided: Brian would be the one to propose. “Which was a great feeling at the time,” Andrew says, “because the pressure was off me.”

The timing of the engagement was never a tension point – rather, both men knew marriage was the next step in their relationship.

But as they boarded a plane to vacation in Puerto Vallarta with friends, the tables would turn…

Find out what happened next. Read Andrew and Brian’s full story here…

put a ring on it
11 comments

What does your choice of wedding band say about you & the love of your life?

David was too tired to show up for his date. Two hours later, he was falling in love…