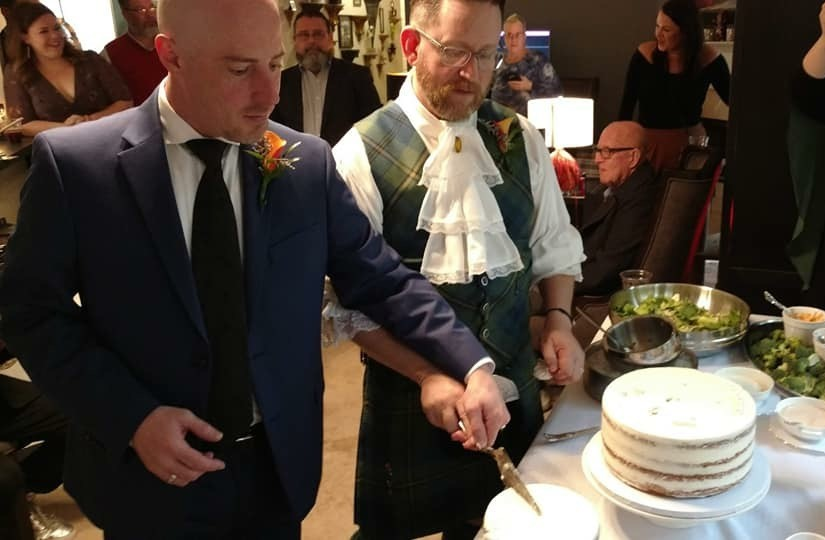 David had just finished working a long Memorial Day Weekend in sales and was too exhausted to show up for his first date with Leamon, a guy he’d recently met online.

In fact, he picked Buffalo Wild Wings because it was right next door to his job and he was too tired to venture much farther.

Two hours later, they still hadn’t ordered when the waitress came over to tell them the kitchen was closing. They were too busy talking.

From a love of rollercoasters to cooking and, of course, shopping, the two were cut from the same cloth.

They covered a lot of ground in their first two years together. They migrated back to Leamon’s native state of Georgia. Dave nursed Leamon through a painful and scary kidney stone episode. Leamon adopted Dave’s three rescue dogs (plus the couple’s two cats).

So when their second anniversary arrived, Leamon made reservations at a fancy restaurant at the Westin Atlanta. He dressed in his full-on Scottish highland uniform: kilt and all.

His mom and Dave’s sister were up to speed and standing by.

David really should have guessed what was about to happen.

But as you can tell by the look on his face, he was completely taken aback. Read what happened next…

put a ring on it
11 comments

What does your choice of wedding band say about you & the love of your life?

lord of the ring

Two men, three dogs, one sword collection, and a surprise that would change their lives…