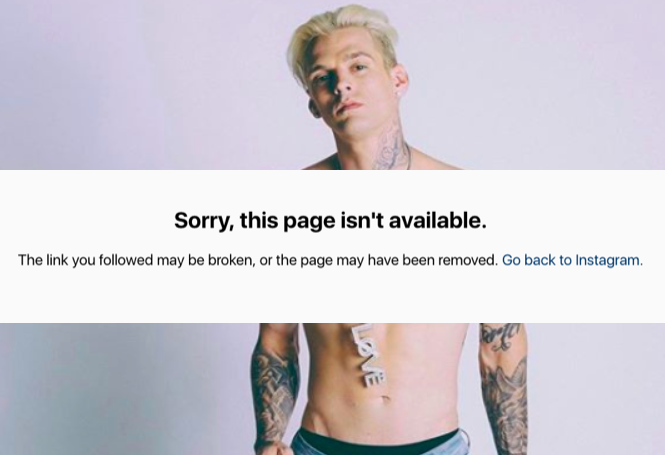 It’s been one week since former tween pop star Aaron Carter came out as bisexual on Twitter:

This doesn’t bring me shame, just a weight and burden I have held onto for a long time that I would like lifted off me.

I grew up in this entertainment industry at a very young age and when I was around 13-years-old I started to find boys and girls attractive.

There were years that went by that I thought about it, but it wasn’t until I was 17-years old, after a few relationships with girls, I had an experience with a male that I had an attraction to who I also worked with and grew up with.

But if you’re hoping to find those tweets, you’ll be hard pressed. Carter’s official Twitter page mysterious vanished over the weekend.

Now, if you try going to his account @aaroncarter you’ll get a message saying the page doesn’t exist:

His Facebook page is still active (for now), though most of the posts are about where to purchase tickets to his upcoming live shows, which leads us to believe the page is being managed by someone other than Carter.

In other Carter news, TMZ caught up with the 29-year-old at the Washington DC airport over the weekend. When asked about the response he’s gotten since coming out, he said, “It’s been amazing.”

But when asked if his famous brother, Nick, has reached out, Arron replied, “Um, no, he…” before trailing off and looking visibly upset.

After gathering himself, he added, “Me and my brothers are wonderful.”

The two brothers have had shaky relationship over the years.

When Aaron was arrested earlier this summer for driving under the influence, Nick tweeted:

To my brother: I love u no matter what & if u feel the need to reach for help, I am here and willing to help you get better. Family isn’t always easy, be [sic] we’re all here for you.

But Aaron didn’t seem to appreciate the well-wishes, tweeting in respond:

If my own blood (Nick) truly cared about my well-being, why wouldn’t he call me directly and have a conversation instead of making this about him through a very public forum? That’s not cool at all to use me for his PR and kick me while I am down. I love my family despite it through thick and thin.

Related: One day after coming out as bi, Aaron Carter’s girlfriend dumps him