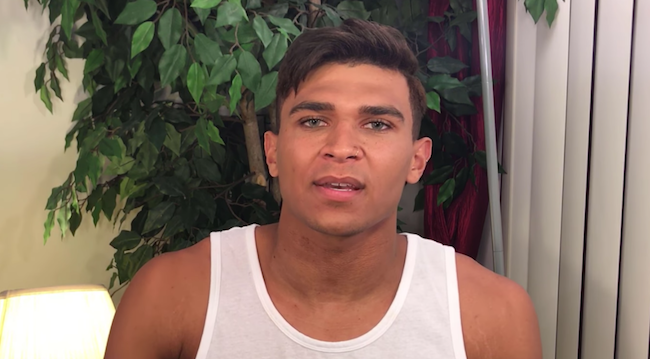 The world of sports and athletics has a long history of not taking too kindly to homosexuals, and for often being shamelessly homophobic.  In locker room banter and sports chants, antigay sentiments are often insidiously knitted into the culture as a whole. Hence why so few athletes are courageous enough to come out of the closet.

Jace Anderson, a triple jump and long jump athlete at the University of Nebraska, was just beginning to come to grips with his sexuality and opening up to people around him when he had an unexpected run-in with three members of the college’s football team.

“I’d just started coming out,” he says in the below video. “I’d come out to a few of my best friends a little bit before that… at the time I hadn’t really come out to too many people.”

In fact, he initially denied he was gay when asked by one girl on campus, who revealed members of her track team had wagered bets on his sexuality.

“I was just denying it – hardcore denying it,” he says.

“That was the first time I threw myself back into the closet, not that I was already out or anything. But outside the track, outside that entire environment I had made really good relationships with my closest friends, being gay and being comfortable with my friends.”

His own confidence began to falter after she admitted the bet.

One night, out at a party with friends, he found himself in the middle of another confrontation:

“In walk these three gigantic – these literally gigantic human beings.

They’re all football players, all linemen, seriously, anywhere from 6’5? to 6’8? 250-pounds plus. They were just really big, massive human beings.”

He’d seen the football players on campus before, and they’d seen him.

“Out of nowhere, one of them goes, ‘Hey man, it was brought up in conversation that you swung for the other team’.

I didn’t really know what to say. I couldn’t really deny it at this point, because my friends at the party already knew, and he literally just confronted me about it.

I didn’t really know how to respond to that, so I just said, ‘Yeah’.”

He said, ‘Hey, we just want to let you know we think that’s awesome and commend you for not denying it or anything like that’.”

“You don’t really hear about that many openly gay athletes here and we think that’s awesome,” the footballer continued.

“They each gave me a hug since they could still tell I was very uncomfortable about the whole thing and I was obviously nervous and that probably they knew caught me off guard.”

That whole interaction just blows my mind to this day.

“They were the last people I thought would have confronted me on that and been so welcoming. They’re honestly just cool people.”