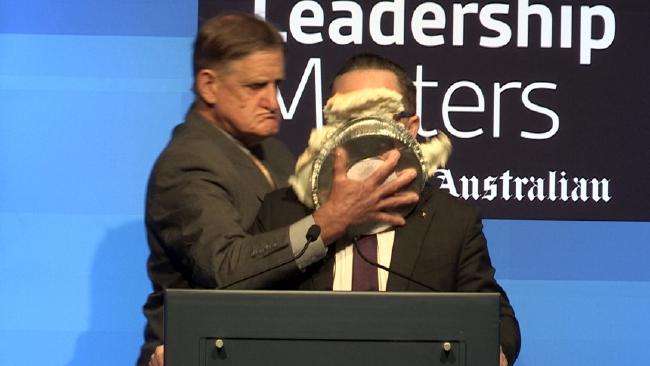 Alan Joyce is the CEO of Australian airline Qantas. He’s also gay, a fierce advocate for marriage equality, and the latest victim of a cream pie attack.

While delivering a speech to 500 people at a business breakfast in Perth this week, a man casually walked up to 50-year-old Joyce and smashed a pie in his face.

The man was Tony Overheu, a senior member of the Church of Christ in the southern Perth suburb­ of Willetton­ who once ran a failed campaign for Senate. Overheu was detained by security until the police arrived. He’s currently in custody.

Joyce, who had been discussing the airline’s new non-stop services from London to Perth, managed to make light of the situation in the moment.

“I don’t know what that was about,” he told the audience. “Now, if there are any more pies can you get it over with now.”

He exited the stage to clean himself up. A few minutes later he returned to the finish his speech and was met with a round of applause from the room.

Of course, not everyone has been as sympathetic. Facebook trolls wasted no time making fun of the situation:

“When you’ve been CEO of an airline for nine years, there’s a lot of things that have happened over that period of time,” he said. “This is different, this is ­certainly an unusual event, but things like this have happened in the past.”

He added that he didn’t actually get a chance to taste the pie, so he’s not sure what flavor it was.

“It was mostly on my glasses,” he said. “My issue is I need a good dry cleaner before I leave Perth, so if you have one, please recommend it.”

See video from the pie attack below…

Pie thrown in face of Qantas chief Alan Joyce while in Perth.Story: https://yhoo.it/2poPEKSReport on 7 News at 6pm.#ausbiz #7News