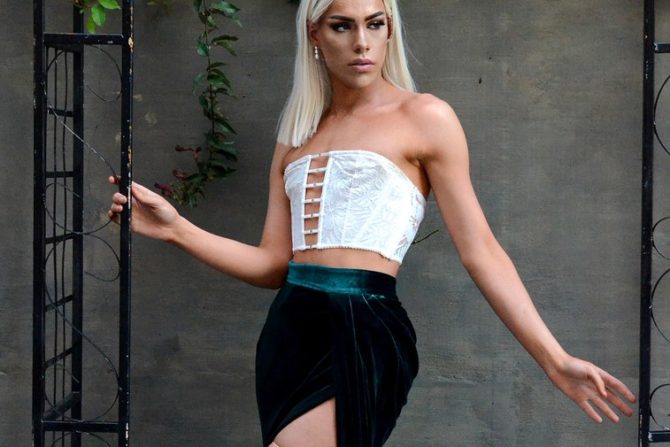 The 18-year-old make-up artist, fashion designer and Instagram enthusiast made quite a splash by arriving in full drag to his prom last week. The Powedersville, South Carolina student, who displays a variety of gender-fluid looks on his social media, arrived in full drag to prom, wearing a Victoria’s Secret corset-top and velvet skirt by House of CB. As a fabulous accessory, he brought a boy as his date.

Pull up and step out lookin fly

Bell’s peers seemed to approve: he won the title of Prom King with a whopping 49% of the vote. Unfortunately, parents of his fellow students didn’t quite understand Bell’s ensemble. The angry parents took to the school’s Facebook page to voice their complaints, attacking the school and Bell for his gender-nonconforming attire. Bell, for his part, insisted that the dress complied with the school’s dress code.

Faculty at Powdersville High had to temporarily disable the school’s Facebook page. The school then issued a statement in support of Bell’s Prom King win:

“This weekend Powdersville High School hosted its annual junior senior prom.  Consistent with the school’s long standing tradition, the students nominated and elected a prom king and queen.  This year the king and queen elected were Aston Irby and Adam Bell.”

Even better, Bell claims that his fellow students continued to support him. The openly-gay student says he often wears make-up and dresses to school, which is why his fashion choice didn’t shock his peers.  He also received an outpouring of support on his own social media accounts.

“Are you kidding me? He wore that dress better than I ever could have,” fellow student Maggi Imaizumi said on Facebook. “If it makes you feel beautiful, you just go right ahead and screw people with negative close-minded views… It takes a lot of courage to be your authentic self.”

He and his prom date made quite the couple, and the pair apparently hit it off.

•Not only did I win prom king but I had a pretty b(RAD) date • thank you so much to everyone that voted me I had absolutely no idea and I never expected this many people to not only accept me but embrace me I love you all! My senior year has been the best and I’ve acquired some pretty great friends. #promking

Bell, for his part, plans to continue to live authentically as an example to others. He also plans to wear a dress to his high school graduation later this year. What better time to work the runway than when collecting a diploma in cap…and gown.