This week, trans model Kenny Ethan Jones had his account censored for featuring “nudity or sexual activity,” despite not actually breaking any of the social media platform’s guidelines. Now, our friends over at the gay blog Cocktails and Cocktalk have had their Twitter page deleted for seemingly no reason.

“Our Twitter account which was removed entirely last week,” Anthony Gilét, the site’s founder and content manager, says. “I’ve appealed the decision four times and clearly they don’t plan on giving any more an answer than ‘managing multiple Twitter accounts for abusive purposes.’ Like, girl what?” 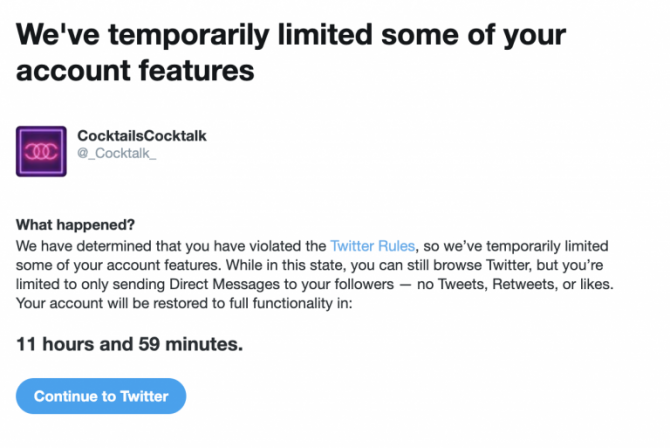 Gilét maintains that he has done nothing wrong and has no idea why the account was deactivated.

“Last week I called Piers Morgan a ‘sad pleb with small wrinkly willy syndrome,’ and that’s the only thing I think that could be classed as abuse, but is it even abuse if it’s true?”

When Gilét tried creating a new account for the site and building his followers back up from scratch, that, too, was deleted, despite having only a single tweet about Ricky Martin welcoming his new baby into the world.

“It sucks that in this day and age social media is so powerful that many of us have to rely on it for an income,” says Gilét. “Further problems unfold when the third-party platforms disagree with anything we do or say, and just like that they’ll take away your hard-earned audience overnight.”