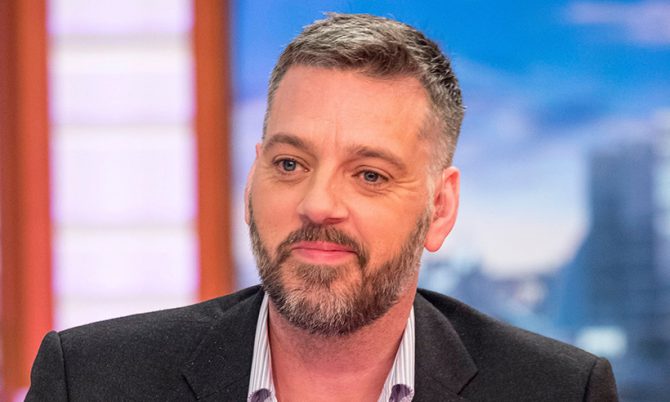 Iain Lee is a popular radio host, comedian, and reality TV personality for the U.K. Last month, he made a big reveal about his sexuality.

After surviving a bad car accident, Lee explained, he began seeing a psychotherapist, who helped him realize he was bisexual.

“He’s helped me realize that I’m probably bisexual. So, I guess, I’m coming out,” he said. “This is me coming out, I suppose, is how they would call it, at the age of 46, and I’m terrified by it.”

He went on to talk about how he first began experimenting with “significantly older men” when he was a teenager, though he’s since come to identify those experiences as sexual abuse.

“I’ve been reminded of a lot of stuff that kind of started when I was about 14 or 15 years old, and would involve me basically engaged in sexual acts with significantly older men,” Lee recalled.

“This went on for quite a while, and I’ve always had a lot of confusion around it, because I started putting myself in these positions so that these things would happen again.”

Now, he says, revealing that part about himself to the world has cost him his relationship with several family members.

In a heartbreaking social media post this week, Lee said he’s been having difficultly sleeping after certain members of his family have severed ties with him.

“Slept badly,” he tweeted on Wednesday. “Full of resentment at how some family members have completely cut me off after I told my story of being abused as an 8 and 14 year old and also about my sexuality.”

“Childish, disappointing and very sad. I expected more from family when strangers have been so kind.”

Slept badly. Full of resentment at how some family members have completely cut me off after I told my story of being abused as an 8 and 14 year old and also about my sexuality.

I expected more from family when strangers have been so kind

During a recent appearance on Good Morning Britain, Lee talked openly about the “shame” he used to feel about both his abuse and about being bisexual, but he said he’s in “in a great place” since coming out to the world.

“It has lifted a huge weight and nearly everyone has been brilliant and it’s not a big thing, it’s not like I am now going to go around and start queening up and going out with loads of guys and stuff,” he said.

“That’s not what it’s about, it’s about saying I have done this stuff in the past that I have had a lot of shame around and actually I don’t need to be ashamed about it. I am in a great place. My life has changed.”

Sadly, Lee’s experience with his family is not uncommon.

A 2016 study by Columbia University’s Mailman School of Public Health found that many bisexual men remain closeted for fear of being labeled as gay, becoming targets of violence, or being disowned by their families.

Another 2016 study by Vanderbilt University found that bisexuals reported the highest levels of psychological distress among the LGB community, with much of this due to feeling ostracized and isolated from friends and family.

Related: A Heartbreaking Look At Why So Many Bisexual Men Remain Closeted