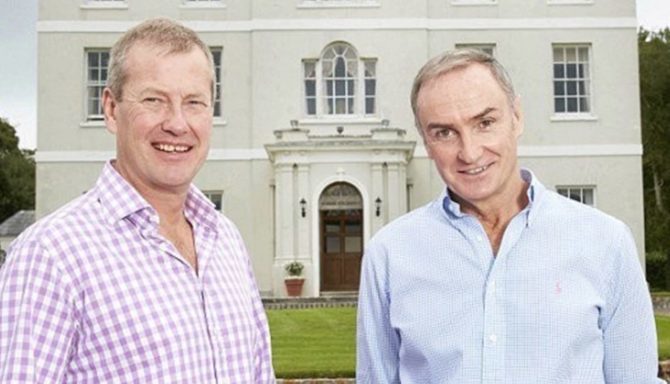 Break out the commemorative tissues because the first-ever gay royal wedding happened over the weekend.

At the same time, he introduced airline service cabin director James Coyle as his partner.

Now, after announcing plans to tie the knot earlier this summer, the guys finally made it official over the weekend in what is being described as a “low-key ceremony” with about 60 guests.

The ceremony was held in the chapel of Mountbatten’s Bridewell Park country estate. 55-year-old Mountbatten was given away by his ex-wife, Penelope Thompson, to whom he was previously married for 16 years. Also present were their three children, Ella, Alix, and Luli.

No members of the royal family were in attendance, though Prince Edward and his wife Sophie had planned on being there before some scheduling issues arose.

The grooms wore matching velvet smoking jackets as they exchanged vows. Music for the event was provided by the famed gospel choir group Elysian Music UK.

What an incredible way to launch @ElysianmusicUK with @teachersrockUK. Performing for the wedding ceremony of Lord Ivar Mountbatten and James Coyle on the beautiful @Bridwellpark estate. A monumental day in the history of the British monarchy #royalfamily #alltogethernow pic.twitter.com/HNOzc6kFpM

The newlyweds’ next stop: A honeymoon in Greece or Croatia! Though they say they’re still working out the details.