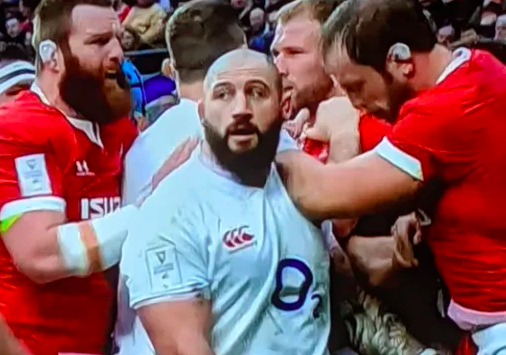 English rugby star Joe Marler has been suspended after grabbing another player’s crotch on live TV.

In a heated moment during the Six Nations Championship earlier this month, 29-year-old Marler was caught on camera tugging on Wales captain Alun Wyn Jones’ crotch on the field.

The incident was witnessed in real time by people all over the world before being widely shared on social media.

When asked about it afterwards, Jones didn’t seem very happy about the whole thing, telling a reporter “Hopefully, World Rugby will have a look at it.”

The 34-year-old father of two went on to say that a lot of people saw the footage and have been supportive of him, but he expressed doubt over whether Marler would face any consequences.

“There’s no place for that in the game,” he said. “We’re all role models for the young players and the next generation of the game, and there are rules in the game. You can’t go outside those rules. If you do, then you face punishment.”

Marler initially responded to the criticism by calling the whole thing “complete bullocks.”

But over the weekend, it was announced he would be suspended from the game for 10 weeks.

Marler hasn’t issued any comment since his penalty was announced. He also hasn’t posted any additional tweets, and his Instagram page has been deactivated.