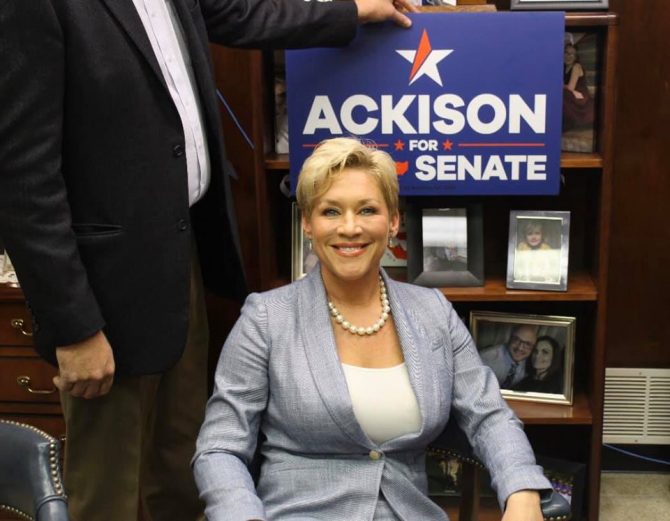 Meet Melissa Ackison. She’s a Republican who is currently running for Senate in Ohio and is facing a tough primary fight against current State Representative Bill Reineke.

At a campaign event this week,  the mother of four decided to take a swing at Reineke by calling him a “limp-wrist, weak-knee RINO.” (RINO is an acronym for “Republican in name only.”)

“This [primary] is where you are looking at your Republican candidates, and you’re literally going to be picking out who you want to send down to the statehouse,” Ackison said.

Because everyone knows the best way to rile up the Republican base is by making unprovoked homophobic personal attacks against one’s opponent.

After receiving heat for the remarks by local media, Ackison doubled down on Twitter, tweeting: “I SAID what I SAID.”

I SAID what I SAID https://t.co/rcVwu6jbe1

So far, the defiant tweet has received seven likes and two retweets in 72 hours.

Ironically, at the same time Ackison unleashed her homophobic verbal assault against her opponent, she is suing another political candidate, Gary Click, who is currently running for the Ohio State House, for allegedly making defamatory remarks about her.

In her lawsuit, filed last month, Ackison says Click called her “trash,” “a liar,” “fake,” “phony,” “a lunatic,” said she “doesn’t act Christian,” and claimed nobody liked her.

Not only that, but he had the audacity to say it at her Republican Party booth at the Union County Fair in Marysville, Ohio with her husband and children present.

Evidently, Ackison can dish it out, but she can’t take it.

In response to the lawsuit, Click issued a statement calling the whole thing “laughable.”

“This so-called lawsuit is laughable,” the statement read. “It’s a complete publicity stunt, and it’s a sad commentary about her viability as a candidate.”

“She’s running for elected office, but is trying to criminalize those who disagree with her,” the statement continued, “in my case by making irresponsible and completely false allegations against someone who is not even her opponent.”

“It is difficult to see this lawsuit as anything more than the misuse of the judicial system as a mere political stunt and a further attempt at intimidation. We are confident that the courts will recognize the same.”