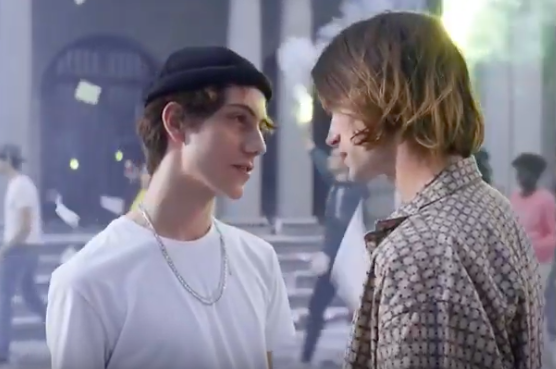 Sometimes a kiss is more than just a kiss, and Sprite, produced by Coca-Cola, is not afraid to broadcast that loving message worldwide.

As a version of The Beatles’ “All You Need Is Love” plays in the background, the freckled man gets a message calling him “poo face,” the skinny surfer gets called “toothpick for sharks,” the pole dancer is asked by a troll, “Left your balls in the locker room?”

The diver gets, “Here comes the tsunami,” the rapper is told “Your songs are better on mute,” and the male couple embrace for a kiss during a Pride parade. “At least they won’t reproduce,” adds the last potshot. The clear soda never appears.

Sprite is one of the latest brands to challenge bullying, homophobia, and sexism in a commercial. In a Spanish-language version on YouTube with 1.55 million views, 73% of 8,400 voters “liked” the commercial.

Made in Argentina and airing globally, the moving ad has nonetheless mostly escaped media attention. While it’s the first gay-inclusive commercial from Sprite, parent company brand Coca-Cola has run several in recent years.

In Brazil, Coke ran a remarkable social-awareness ad too, this one focusing on a popular, homophobic expression there that actually uses its brand name, “This Coke is a Fanta.” (Meaning the outside doesn’t match the inside.) Listed with their national flags, others are included: sword swallower (Argentina), pillow biter (Spain), and “he plays for the other team” (USA).

So Coca-Cola created a limited edition Coke — with Fanta actually inside. Launched on Pride day, the cans say, “This Coke is a Fanta, so what?” The ad notes, “A single can turned a homophobic expression into a symbol of Pride. It changed the way people searched for the expression on Google. A conversation full of hate changed overnight.”

Back in the UK, Coca-Cola also ran a gay-inclusive commercial for its Coca-Cola Zero Sugar brand, in which an old man in a nursing home tries the soda for his first time, then wondering what else he hasn’t tried. To the Queen tune, “I Want to Break Free,” a series of fantastic events unfold, including him shirtless, in a Roman gladiator costume in a gay pride parade.

Cluelessly, he asks another, “Where are all the ladies?”

Michael Wilke has covered LGBTQ issues in advertising since 1992, is the founder of Commercial Closet/AdRespect.org, and Senior US Consultant for LGBTQ marketing and diversity firm Out Now.