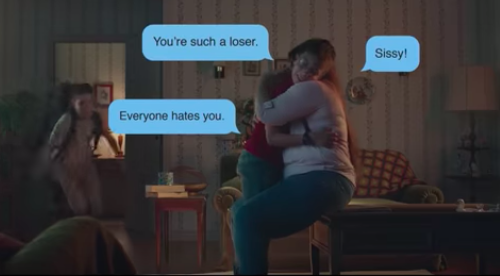 Every so often a commercial rises from the pack and sparks debate by challenging conventions.

Coca-Cola addressed race and celebrated multiculturalism with its familiar song, “I’d Like to Teach the World to Sing.” Keep America Beautiful raised awareness of littering with a crying American Indian.

More and more advertisers today are addressing bullying, homophobia, sexism and stereotypes by breaking them down. These companies aren’t trying to just win a gay pot ‘o’ gold — they’re taking a stand, in your face and pushing the national conversation.

Here are 7 ads that did it best over the years:

Procter & Gamble’s new online Gillette commercial takes on bullying and sexism while challenging the company’s own iconic slogan, “The best a man can get” by asking, “Is it?”

In text message bubbles, the word “sissy” appears on screen with other negative comments.

“It’s been going on far too long,” the voiceover says.

Former NFL player and “Brooklyn Nine-Nine” actor Terry Crews, a sexual assault survivor, is included. “Men need to hold other men accountable,” he says. The ad ends on this note: “The boys watching today will be the men of tomorrow.”

Related: Is this honey ad featuring “three bears” the best commercial ever made? You decide.

Predictably, the ad triggered a backlash against Gillette, but overall the ad appears to be polling well. (Which Gillette’s internal surveys no doubt predicted before it was released.)

Gillette isn’t the first men’s personal-care brand to take an evolved outlook on masculinity. Unilever’s Axe broke down its own bro branding approach and ran the “Find Your Magic” spot on the Super Bowl in 2016 that featured a drag ball and championed individuality.

A year later, Axe upped its game and asked, “Is it OK for guys to experiment with other guys?” Or “be the little spoon” or “to wear pink?”

Leveraging children’s love for graham crackers, Mondelez’s Honey Maid weighed in on the importance of diversity and inclusion of families with its three-year “This is Wholesome” campaign that featured gay male fathers.

The so-called One Million Moms club predictably stirred up conservatives, causing Mondelez to double down and actually feature some of the hateful comments in its clap-back spot, turning them all into a sculpture of the word “love.”

In January, AT&T released a gay dads commercial, “Just OK is not OK,” where the babysitter can’t seem to remember anything about the children she’s about to care for.

Ancient troll Peter LaBarbera and his Americans For Truth group rolled out the usual homophobic rants to try to shame AT&T but that kind of negative nelly complaint doesn’t hold the same weight today it did a decade ago when marriage equality is entrenching and parenting is increasingly common.

This spot from 2005 reverses stereotypes and is all about ogling men – by supermodel Cindy Crawford and Carson Kressley, a breakout star from the first “Queer Eye for the Straight Guy.” It turned heads among Super Bowl TV watchers.

Long before its Colin Kaepernick NFL flag-kneeling ad, Nike ran a groundbreaking and empowering spot that featured the legendary “Just do it” slogan and marathon runner Ric Munoz who had HIV. It challenged the way people thought about the stigma of the virus.

Ikea broke ground that few have forgotten when, in 1994, it became the first advertiser to depict a same-sex couple doing something together so ordinary as buying a dining table. The revolutionary ad led an Ikea store in Long Island, N.Y., to be evacuated due to a related bomb threat, but the retailer has since included dozens of LGBT references in its ads globally over the decades since.

Michael Wilke has covered LGBTQ issues in advertising since 1992, is the founder of Commercial Closet/AdRespect.org, and Senior US Consultant for LGBTQ marketing and diversity firm Out Now.