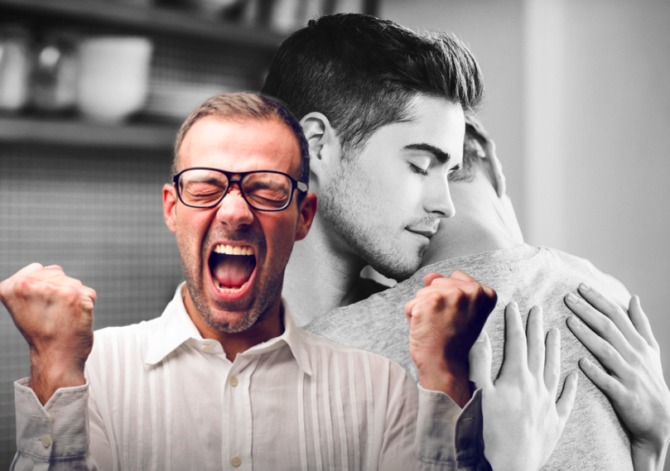 What is with all the man-on-man that’s been affection going on lately? That’s what Matthew Bell over at The Spectator wants to know.

In a new think piece titled Why I can’t embrace the man-hug, Bell writes, “Meeting men used to be so easy. I don’t mean that in a Grindr sort of way.”

(For the record: Bell is a straight white male who is married to a woman and, we assume, has probably never met a man on Grindr, though we could be wrong.)

“When a chap bumped into a chap, you knew what to do,” he continues. “Stick out your paw and shake his hand and everyone could move on.”

But these days all guys seem to want to do is hug.

“The handshake, once such a simple act of courtesy, now seems too stiff, too formal, too English,” he writes. “It has become absurd to shake hands with your father, or your best friend. You might as well tell him you don’t like him.”

“Something more is required — a back slap or an arm squeeze, perhaps even a man-hug.”

God forbid! Not a man-hug!

“Masculinity has been in crisis for years,” Bell continues. “Now we don’t even know how to say hello.”

To be fair, Bell says he’s not totally opposed to hugging. He just doesn’t like “awkward hugging.” Though, if he’s really honest, pretty much all hugging is awkward, especially when it’s between two men.

“I hate an awkward hug,” he writes. “It is worse than no hug at all. If it’s going to happen, you want to get it right, though really I would rather not have to think about it.”

In some places, he continues, dudes don’t just hug. They kiss. This also freaks him out. He recalls a recent trip to Italy, where he was constantly dodging other men’s lips:

It is normal for Florentine men to peck each other on the cheek. Several times I have caught myself recoiling–even ducking–before realizing what was going on. Similar embarrassments occur back home, usually when meeting someone under 30. That generation of millennials grew up watching Skins and Glee. They can’t believe anyone could be so pompous as to shake hands. And if you try, they look at you with bemusement or simply wave your hand aside and pull you in for a hug.

So what would Bell like done about this situation that makes him extremely uncomfortable?

“Someone needs to lay down the rules on male greetings once and for all,” he writes. “My proposal would be to scrap all man-hugging except with family members, and bring back the quick and friendly handshake.”

Related: Are You Finally Ready To Embrace The Idea Of ‘Inclusive Masculinity?’

While we’re at it, he says, we should also do away with women hugging and/or kissing women. That makes him uncomfortable, too.

“For them, it’s kisses all the way, be it with best friends or strangers,” he says. “It can’t be pleasant for women to have so many faces pressed into theirs.”

Not to mention the “accompanying hygiene hazards.”

Until this is figured out, Bell says, every day for him will be “fraught with the possibility of being made to feel either uptight or overfamiliar.”

“It’s time we ended the ghastly dance of uncertainty,” he concludes. “This is a call to arms. Or rather, hands. Men, get a grip.”

Get a grip, indeed!

Related: 93 Percent Of Hetero British Guys Say They Love Cuddling With Other Men