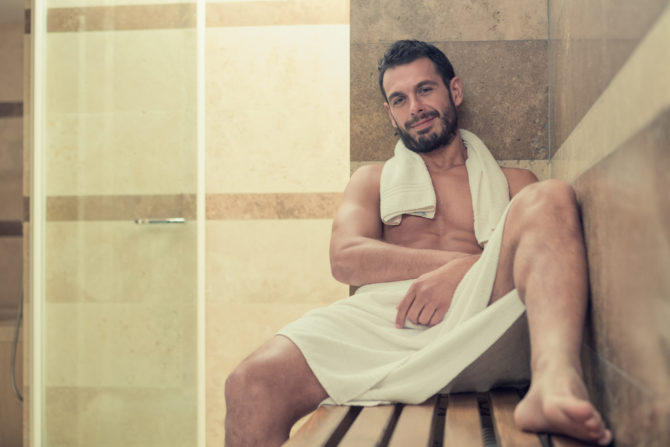 Have you ever wondered was it’s like to work at a gay bathhouse?

Sebastian Fortino took a job at a bathhouse in Portland after his marriage crumbled and he found himself without a reliable income.

“A friend, tired of asking about the job search and paying for my drinks, said, ‘I know someplace that’s hiring,'” he writes in a new post published by Unicorn Booty. “He texted me the link. I was at first shocked that he’d sent me a job listing for a local gay bathhouse, but I accepted it as a challenge.”

“I no longer work in a gay bathhouse,” Fortino says, “but it was an experience I’ll never forget.”

Here are some highlights from Fortino’s behind-the-curtain exposé of the Portland bathhouse scene:

On the non-stop work:

In a gay bathhouse you’ll be tasked with bringing dirty towels to the laundry, then flipping them into the dryer. Of course you’ll have to roll or fold them. It’s a nice little upper-body workout due to the repetition.

You’re also on your feet a lot. That Fitbit or health app on your phone will record several miles a day. Then there’s carrying buckets of water to mop floors and disinfect club-issued sandals.

Steamrooms must be cleaned multiple times each day. A few times each week, a really thorough cleaning happens. Grates are removed, and these are heavy. Then you scrub everything, also a workout.

Then, of course, there are mattresses. They’re generally twin mattresses, but clubs often have higher-end rooms with larger ones. These need to be wiped down, on both sides. If you’re doing six to eight of these flips each shift, you’re sure to see your pecs and upper arms grow.

On one of my first shifts — a slow weekday afternoon — I pulled out my spray bottle and cleaning cloth and went to spray the frame around the glory hole. All of a sudden, a rather large phallus was presented to me. While I was admittedly flattered, I didn’t know what to say, so I looked up. This owner was smiling down at me from above. “Sir, I’m working,” was my droll response, but it worked. He removed his engorged member from its uncomfortable distance to my face.

At one time, bathhouses were primarily for bathing. Only in the last century did running water become standard in homes across the economic spectrum. If you worked in a coal mine, chances are at least once a week you’d go to the local bathhouse and clean up.

“Unfulfilled” gay bathhouse patrons will sometimes berate you. They made an “investment of time and money,” and dammit they haven’t “had the full experience.” This is usually delivered by angry, naked men, their brows furrowed above flaccid, disappointed penises. “It’s not our job to get you off,” you remind them. “That’s your responsibility.”

After a month of working in a gay bathhouse, I was desensitized. The Oh my God, that’s so f-ing hot! or Oh, sh*t, I didn’t think you could do that with a zucchini! was fun in the beginning, but soon you walk around without turning your head towards the constant moaning. Servers often say they can’t look at food after work. It’s like that.

Related: Lawmaker “shocked” when he goes to bathhouse and sees men having sex