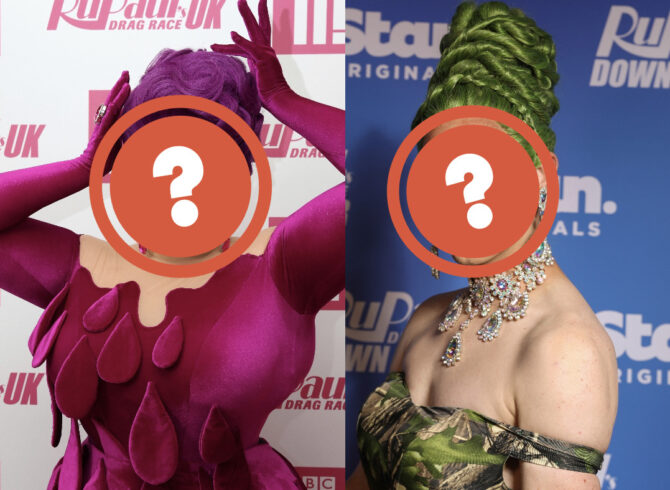 Several notable queens from different Rupaul’s Drag Race series around the globe returned to Twitter last night after being mysteriously absent from both social media and performances for the past month, and all signs point to a new crossover season having just finished filming. Some of the recently missing queens returned to social media with less-than-subtle nods to their time away, while others have yet to announce their reappearance. Here are the four queens who’ve tipped us off so far:

This queen from the second season of Canada’s Drag Race would be the first main season winner to sashay into a “vs the World” competition. While an eyeball emoji and a Tiktok is not quite an admission, this recently crowned queen’s absence at DragCon LA earlier this month is certainly cause for suspicion (though, after the blow up at the Canada’s Drag Race season two cast panel, she may not have too much FOMO).

Following her medical disqualification from Drag Race UK season three from an injured knee, fans were surprised to not hear Ru give frontrunner Victoria Scone an open invitation to the next season. If all the rumors are true – other than the rumor she’s made up herself in this tweet – we may see this early fan favorite back to compete after all.

Hello my darlings! I broke both my arms in a roller skating accident – but I’m back!!! 😍

We would never call a queen a liar, but this statement makes us think Ms. Wigl’it may be fudging the truth just a smidge. Anita won over the hearts of Drag Race Down Under viewers with her chipper attitude and winning Snatch Game performance before being suddenly eliminated two episodes later. Hopefully her possible “vs the World” run sees her joining the winners circle next to her House of Drag co-host and Drag Race Down Under sister Kita Mean.

Sorry I was taking a nap pic.twitter.com/6wODUJwcaQ

After touring with her Brat Pack besties Synthia Kiss and Gia Metric, it was odd to see the trio inexplicably reduced to a duo at DragCon, especially with Kendall having made it the furthest of the three on Canada’s Drag Race season two. Apparently Kendall just overslept for the event by about a week straight. Whoops!

All of these queens have been on our TVs in just the last year and half, so let’s hope that there may be at least a couple of Drag Race veterans in store to round out the cast. After all, who doesn’t love to see a triumphant return?

There are several other queens who’ve been notable absences from tours, performances, DragCon LA, etc., but we’ll let them reveal themselves when the time is right. If you’re simply too curious to wait, there’s a convenient thread on Ru-girl disappearances on the r/SpoiledDragRace reddit forum that may satiate your wondering – but you didn’t hear it from us!