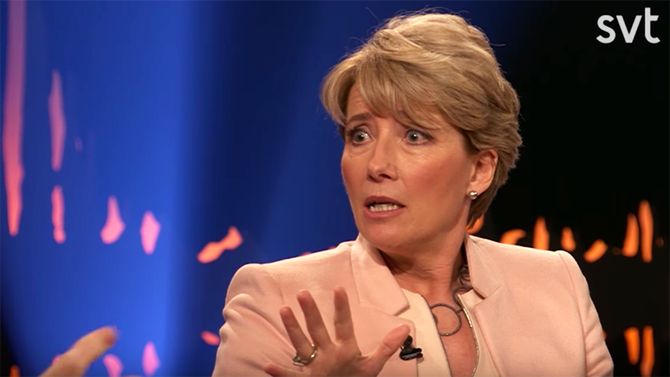 First Lady Emma Thompson? It almost could have been.

While speaking to Fredrik Skavlan on his talk show this week, actress Emma Thompson recounted a truly bizarre exchange she had with Donald Trump nearly 20 years ago, in which he invited her to come live with him at Trump Tower without ever having met her.

Thompson explained that it was shortly after her divorce from Kenneth Branagh. She was shooting 1998’s “Primary Colors” when she got an unsolicited call from Donald in her trailer.

“So I lift up the phone–‘Hi, it’s Donald Trump here,’” Thompson recalled. “And I said, ‘Really? Can I help you?’ And he said, ‘Yeah, I just wondered if I could offer you some accommodation in one of my Trump Towers. They’re really comfortable.”

The Washington Post notes that, based on the timeline, the come on would have taken place around the time Trump announced his split from his second wife, Marla Maples, since their divorce was later finalized in 1999.

Thompson said the call left her totally confused. After all, most people invite someone out for dinner or drinks as a first date, not offer them a place to live.

She continued, “‘Well, I think we would get along very well,” she remembers saying, uncomfortably. “Maybe have dinner sometime?”

Watch her tell the story below.