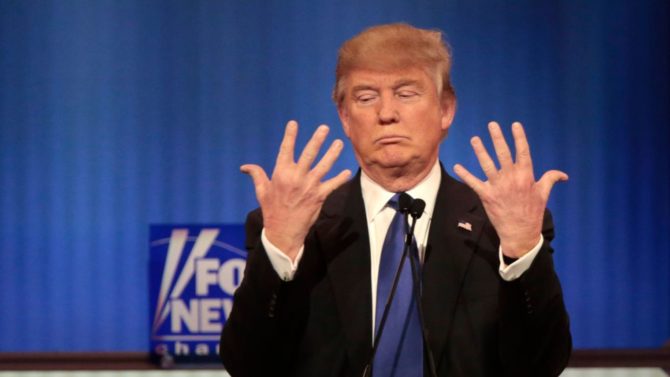 This just in: Donald J. Trump claims he can predict major world events either before or after they do or do not happen.

In an absolutely insane interview with Time, Trump was asked about all the false claims he’s made on Twitter, in interviews, in speeches, and during press conferences.

Not everything has been false. In fact, some of the things he said that were false at the time became true eventually.

“I predicted a lot of things, Michael,” Trump said. “Some things that came to you a little bit later … What am I going to tell you? I tend to be right. I’m an instinctual person, I happen to be a person that knows how life works.”

Let’s take a brief look at some of the things Trump claims to have “predicted” in the interview, shall we?

First, he says he predicted the non-existent terrorist attack in Sweden:

Sweden. I make the statement, everyone goes crazy. The next day they have a massive riot and death and problems.

(For the record, a few days after Trump’s comment there was a small riot, but nobody died.)

He also says he predicted the FBI would find some sort of scandal involving Huma Abdein, Anthony Weiner, and Hillary Clinton:

Huma and Anthony, you know, what I tweeted about that whole deal, and then it turned out he had it, all of Hillary’s email, on his thing.

(By “his thing,” we believe Trump is referring to Weiner’s laptop.)

Oh, and he says he predicted the U.K.’s withdrawal from the European Union:

Brexit. I was totally right about that! You were over there, I think, when I predicted that, right? The day before. … Brexit! I predicted Brexit! You remember that? The day before the event. I said, “No, Brexit is going to happen,” and everybody laughed, and Brexit happened. Many many things. They turn out to be right.

Also, the terrorist attack in Brussels:

As well as Bernie Sanders’ defeat in the primaries:

And what about those three million undocumented immigrants he claims voted in the 2016 election?

Well, I think I will be proved right about that, too. … I have people say it was more than that. We will see after we have. But there will be. We are forming a committee. And we are going to do a study on it. A very serious problem.

(For the record: There is zero evidence of widespread illegal voting in the election.)

He also says he predicted he would win the election:

(To be clear, Trump wasn’t exactly “number one” the “entire route.” He received 3 million less votes than Clinton in the popular vote.)

Trump’s final prediction? That he’s going to be on the cover of Time magazine more times than Richard Nixon was during his presidency:

I’m sure I’ll win. … Time magazine, which treats me horribly, but obviously I sell… Covers. Nobody’s had more covers.

“That’s the story,” Trump said, before abruptly ending the interview. “Hey look, in the mean time, I guess, I can’t be doing so badly, because I’m president, and you’re not. You know. Say hello to everybody, OK?”