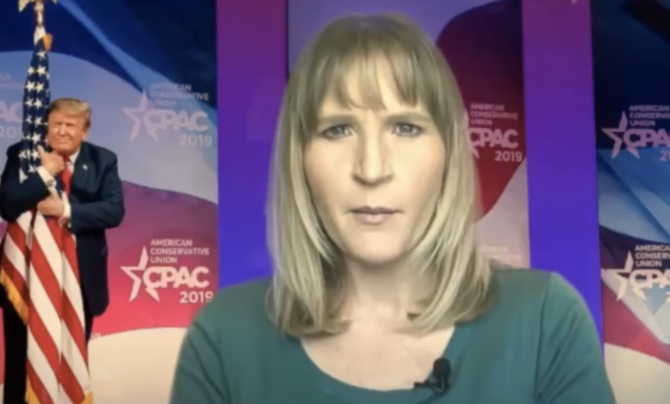 Last year, Liz Harrington left her gig as editor-in-chief at War Room, Steve Bannon’s far-right website and podcast, to become Donald Trump‘s personal spokesperson. During her tenure at War Room, the site’s YouTube channel was removed for spreading false claims about the election.

That should tell you everything you need to know about Harrington’s relationship with reality.

This week, Harrington argued that there is “no need” for President Biden to deliver the State of the Union address, as the task was already completed when Trump spoke at the Conservative Political Action Conference (CPAC) over the weekend.

“There’s really no need for him to give a State of the Union [from] the fraud that’s sitting in the White House right now because President Trump summed it all up on Saturday at CPAC,” she said.

In the same breath, she blamed Vladimir Putin’s invasion of Ukraine on Biden.

In addition to tirelessly promoting Tump’s big lie, Harrington has also repeatedly attacked the transgender community, opposing the rights of trans people to use the bathrooms of their choice, and lying about trans people in the military.

Speaking in favor of former President Trump’s ban on transgender people serving in the military in 2017, Harrington told Tucker Carlson:

Even the RAND Corporation admits that every transgender soldier who goes through transition will be out an estimated 238 days. So that is 238 days that they’re not going to be deployed overseas in active duty and someone else will have to go in their place. So when the White House says this is about cost but it’s also about readiness, they’re absolutely right, because they’re taking the place of someone else, and they’re get to have the taxpayer-funded surgery, and then they’re not available to be deployed because these surgeries are extensive and then it’s 238 days. That’s most of a full year. So it’s really striking.

MediaMatters later revealed that Harrington misrepresented the study to come up with her false numbers.