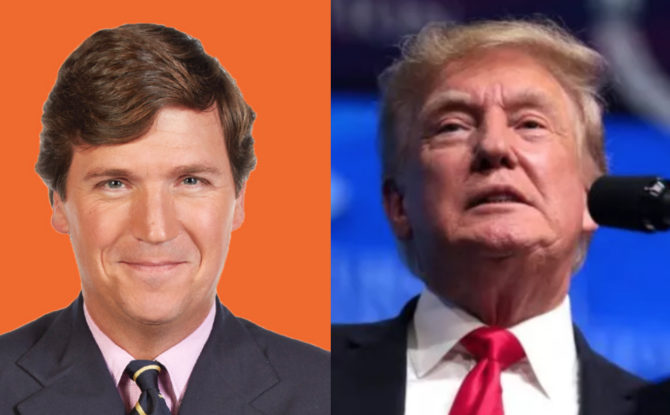 When conservative powerhouse Club for Growth chief David McIntosh ran ads against Trump-endorsed J.D. Vance in Ohio’s GOP Senate primary, Donald Trump responded by instructing an assistant to text McIntosh “Go f**k yourself.” The behavior feels on brand for Trump, but it turns out there’s something very strange behind the right-wing rift.

A new report from Rolling Stone claims that Trump decided to endorse Vance after hearing rumors about McIntosh’s sexual proclivities on a phone call with none other than the testicle tanner himself, Fox News host Tucker Carlson. McIntosh is backing Vance rival Josh Mandel.

Carlson swayed Trump to throw his support behind Vance, who one described himself in an interview as “a never-Trump guy,” in part by convincing Trump that McIntosh has “an embarrassing and ‘chronic’ personal sexual habit,” the publication writes.

“During that phone call, the twice-impeached former president spent a notable amount of time gossiping and laughing about the prominent Republican’s penis and how ‘f*cking disgusting’ and ‘f*cking gross’ he allegedly was.”

Trump, who has been accused of sexual misconduct by at least 19 women, was apparently already obsessed with Mandel’s own sex life, “having already spent months privately regurgitating and spreading salacious, unverified rumors that he’s heard about ‘f*cking weird’ Mandel’s supposed debauched ongoings.”

Carlson’s comments about McIntosh reportedly sent Trump into a fit of laughter.

“Absolutely ridiculous. False and manufactured nonsense,” McIntosh tweeted in response to the rumors.